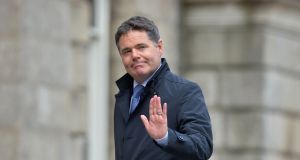 Minister for Finance Paschal Donohoe has denied there are “mixed messages” between himself and his Fine Gael party leader Tánaiste Leo Varadkar over passing on VAT reductions to customers.

Mr Donohoe said the message on the 2 per cent reduction of VAT from 23 per cent to 21 per cent announced yesterday in the July stimulus was very clear and that he and the Tánaiste were very clear on it.

Speaking at a press briefing on the €7 billion July Stimulus package, which includes €5.2 billion of new stimulus in addition to a €2 billion credit guarantee scheme, he said, “(We all) recognise the pressure that retailers are facing, that our shops are facing, at the moment. There are fewer customers coming into them.

“The Tánaiste was recognising that for some retailers that times are so hard at the moment if they were to (pass on) the full effect this could create a dilemma for them,” he said.

“We want all retailers to pass on the VAT cut but we do recognise that for some retailers their situation is so precarious that they might pass some of it on to customers and keep some to retain their people employed.”

He said the Tánaiste recognised that complexity.

Speaking on RTÉ’s Today with Sarah McInerney show on Friday morning, Mr Varadkar said retailers can decide for themselves how they use the VAT reduction. “From my point of view, if I was going into a clothes shop today to buy a T-shirt or a suit or shoes, rather than a two per cent reduction in the cost of that I would rather keep on the staff member,” he said.

The largest-ever cash injection for the ailing Irish economy was announced by the Government in a bid to rescue it from the effects of the pandemic yesterday. The €5 billion in cash, along with the €2 billion in loan guarantees for businesses, will be spread widely across public investments, worker and welfare supports, and funding for business and tax cuts, with Taoiseach Micheál Martin insisting that most of the money will be applied this year.

The total values of all coronavirus actions taken by the Government now amounts to €24 billion in 2020, Mr Donohoe said.

He said such spending is unprecedented in the history of the State.

Speaking about the €7 billion July stimulus package, he said “it is greater than the scale of packages in comparator countries”.

He said that, proportionately, the summer package was greater that that announced by the UK Government in recent days, which amounts to a total of £30 billion (€36 billion).

He said the economic shock had meant that overall spending by the Government would exceed €86 billion in 2020, compared to projections of €70 billion at the start of the year.

Mr Donohoe said the reality was that 750,000 Irish workers were on State schemes that did not exist four months ago.

He said that the rationale of the stimulus was to create and sustain employment and to give small Irish companies a “fighting chance” of surviving in the wake of the pandemic.

“The measures are of real value. They are practical and operable quickly and will help to create new employment and sustain jobs,” he said.

He said the extension of the wage subsidy scheme was the centrepiece of the the stimulus as without it many Irish companies would not continue to be viable during this period.

On the claim made by Sinn Féin that those who spend money on tourism or hospitality in January 2021 will not receive a tax rebate until 2022, Mr Donohoe alluded to this being the normal process for such schemes.

He said the start of the scheme is later in the year because the Government wants to encourage those who can afford to do so to book another holiday at home.

“Because we are looking to pass on the discount for additional expenditure, the rebalancing will occur at the end of the tax year

“That is why we have a discount of 20 per cent. It’s higher than the rate of VAT in relation to new spending. We know this sector needs support,” he said.