ASTI warns that funding to reopen schools is insufficient 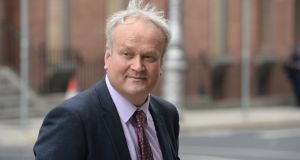 ASTI general secretary Kieran Christie: he said the “penny-pinching under-vestment in our schools has gone on for too long, the cuts have been too deep”. Photograph: Dara Mac Dónaill

A commitment of €42 million to help secondary schools prepare classrooms for the return of students is insufficient, and the Government will have to “dig deeper”, the Association of Secondary Teachers of Ireland (ASTI) convention was told on Friday.

Mr Christie said the capital allocation in the Government’s multi-billion stimulus plan published on Thursday was unlikely to be enough to fund the reconfiguration of classroom space, adapting storage facilities and toilet areas, and altering desk layouts and other upgrades.

“In truth it is doubtful that this capital works package will be enough to meet the enormous challenges that are out there. I suspect they will have to dig deeper,” he told the online convention.

“We have provided a large shopping list. We insisted on a large and comprehensive investment in the process from central government.

“The penny-pinching under-investment in our schools has gone on for too long, the cuts have been too deep, and if ever there was a moment that they will need to step up to the plate it is with the reopening of schools in the midst of a pandemic.”

The Government is set to publish plans on how it intends to support the safe reopening of schools on Monday.

As well as funds for structural alterations, the plan is also expected to address other issues for teachers including enhanced supervision and substitution given the expected increase in staff absences.

Mr Christie told members there was a lack of support within ASTI for a return to standard classrooms, as he had previously outlined to the Oireachtas Covid-19 committee.

In its engagement with the department, he said ASTI had set out several priorities. These include comprehensive measures to support social distancing, substantial capital investment, including the rental of extra spaces where necessary, and additional support in the area of cleaning and hygiene requirements.

“The department has assured us that there will be an abundance of sanitising and PPE supplies available to schools from the get-go. We will be holding them to that promise,” he said.

“We have argued for substantial additional support in the areas of supervision and substitution. There is no doubt that existing resources will be inadequate.

“No more can a teacher soldier on, as many are inclined to do, when a cough and sore throat persists for days.”

Among several issues around reopening schools outlined by the association is the need for revised leave arrangements given an “inevitable increase” in absences, while highly vulnerable teaching staff must also be taken into account.

Mr Christie also said they had sought a suspension of any new subjects being introduced given the demands of what lies ahead.

“The negative consequences for the quality and fairness of education could last for years,” he warned members.

Earlier, ASTI president Deirdre Mac Donald said when she finished her tenure she intended to forward a motion addressing the health and safety of teachers. This, she said, would demand adequate financial resourcing, training and additional staff.

“We will not be returning as normal to schools in September,” she said. “There will be big changes and big challenges.”

Mr Christie had praised second-level teachers for providing remote learning to students within days of school closures without resources or training.

However, addressing the convention remotely, Edel Farrell, a member of ASTI’s education committee, said this had led to an increase in workload and hours.