School reopening plans to be unveiled on Monday, says Taoiseach 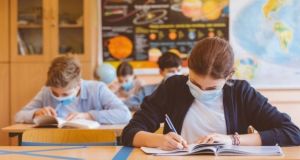 A plan to reopen schools to all pupils on a full-time basis will be published next Monday. Photograph: iStock

A comprehensive plan to fully reopen schools to all pupils on a full-time basis will be announced next Monday, Taoiseach Micheál Martin has confirmed.

He was speaking following a briefing from the Minister for Education, Norma Foley, and senior officials at the Department of Education on Friday morning.

Mr Martin said a major financial package will be unveiled along with detailed guidance for schools to assist them with fully reopening in a “robust and resilient way”.

“The objective is that schools reopen fully and keep everyone safe. The full plans will be outlined on Monday. They are by nature comprehensive. It’s a holistic plan, involving everyone in the school community, ranging from curriculum to teacher supply and supports, right across the board,” Mr Martin said.

The Taoiseach said he wanted to give confidence and hope to parents that extensive planning had gone into the reopening plans.

“We want this to be for the long haul,” he said. “I’m very confident we’re in a good position, thanks to the strong partnership approach, [to reopen] towards the end of August.”

Mr Martin confirmed that special measures will be in place for “high-risk” or immuno-compromised students and teachers who cannot return to the classroom.

He declined to comment in more detail ahead of Monday’s announcement.

Ms Foley added that her number one objective is the “full and safe” reopening of schools.

In response to questions over the lack of clarity or detailed guidelines, Ms Foley insisted that “clarity takes time” and said her department was taking a team approach to reopening schools in consultation with the wider school community.

She paid tribute to teachers, schools and students’ representatives whose contributions and observations have informed the plan.

While physical distancing rules advise that one-metre distancing is required between pupils in most circumstances, Minister of State for Special Education Josepha Madigan said this should not form any obstacle to the full return of special schools or classes.

“Our aim is to support all schools so that they can re-open in the autumn. This involves recognising the additional challenges faced by special schools and schools with special classes, in terms of cleaning, social distancing, and the health vulnerability of the students,” Ms Madigan said.

Both ministers confirmed that the “July stimulus” package announced earlier this week includes €75 million in grant aid to fund school reconfiguration work to assist with reopening in August.

These works may include reconfiguration of classroom space, adapting storage facilities, altering desk layouts, adapting toilet areas and other types of work. The grant will be paid directly to eligible schools during the month of August.

The plans to be announced on Monday, meanwhile, are understood to include funds for additional substitution cover, structural alterations to classrooms and to improve bathrooms for hand-washing, along with daily cleaning and hygiene routines.

Enhanced supervision and substitution will be needed to cover an expected increase in absences of teachers and special needs assistants in light of official guidance that states teachers with any symptoms should stay away from the classroom.

Detailed guidelines will be issued to schools next week with templates on safe classroom layouts and protocols for a Covid-19 outbreak.

Large quantities of hand sanitiser and personal protective equipment are being contracted centrally and will be distributed to schools.

“We need certainty and assurances that school will return at the end of August – dragging this out is causing real concern,” he said.

Labour’s education spokesman Aodhán Ó Ríordáin also criticised a lack of clarity to date which, he said, was feeding into anxiety on the part of parents and students.