Victoria Cross won by Irishman to go on display in Dublin 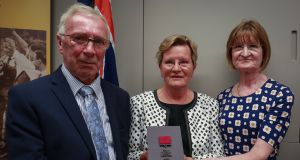 Bill O’Hara and his cousins Bridget and Noreen O’Meara with the Victoria Cross medal awarded to their great-uncle Martin O’Meara. Photograph: Crispin Rodwell

The only Victoria Cross won by an Irishman in an Australian army uniform will go on display from Friday at the National Museum of Ireland in Collins Barracks.

The repatriation of Martin O’Meara’s medal needed an act of parliament to leave Australia and is on loan to the National Museum for a year.

O’Meara was born in Lorrha, Co Tipperary, in 1885. He emigrated to Australia in 1912, where he worked as a wandering labourer until joining the Australian Imperial Force in 1915.

He was wounded three times during the first World War. O’Meara won a Victoria Cross in August 1916 during the worst days of the Battle of the Somme, when he went out innumerable times to rescue men wounded in no man’s land.

Usually a Victoria Cross is won for one significant act of gallantry, but his comrades testified time and again to O’Meara’s extraordinary bravery.

The citation for his VC, as published in the London Gazette, reads: “He showed throughout an utter contempt of danger, and undoubtedly saved many lives.”

The medal was unveiled on Thursday night at the Australian embassy in front of invited guests including relatives of O’Meara.

His great-niece Noreen O’Meara from Tunbridge Wells grew up with stories of O’Meara – her father Martin was named after him.

“We had his photograph on the mantlepiece,” she said. “His story was quite well known in Australia, but not well known in Ireland. It’s a life-long ambition for all of us to see the Victoria Cross to come back to Ireland. Sadly my father is not around to see this happen. It would have made him very happy.”

The Australian ambassador to Ireland, Richard Andrews, said the repatriation of the medal was in recognition of the close historical ties between Ireland and Australia.

O’Meara spent the rest of his life in Australia after the war and died at the age of 50 having suffered several severe mental breakdowns.

He was diagnosed with “delusional insanity” and for long periods during his incarceration he was in a straitjacket for 16 hours a day.

The medal will go on display in the first World War section of Collins Barracks.

Curator Brenda Malone said: “This is one of the big loans from Australia. We have a huge diaspora and sometimes when Irish people do amazing things, their medals end up in museums around the world so we are really grateful to have Martin’s medal back here and to tell his story in his own country.”