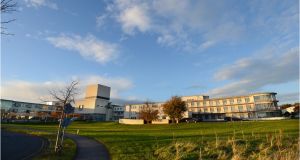 Connolly Hospital, Blanchardstown. Consultants have called for the opening of the new children’s urgent-care service at the hospital to be delayed. File photograph: Dara Mac Donaill

Nearly 30 of the State’s top paediatric consultants have warned health authorities that it will be unsafe to open the new children’s urgent-care service at Connolly Hospital in Blanchardstown on schedule next week.

Last week, The Irish Times reported that the Connolly Hospital facility – the first element of the new national children’s hospital – would initially only open from 8am to 6pm, Monday to Friday, due to a shortage of medical consultants.

In a letter on Wednesday, consultants in paediatric emergency medicine, paediatric radiology and paediatric laboratory medicine called for the opening to be put back until it could be done on a safe basis “on as early a date as is feasible”.

“The risks that are visible to use are considerable and cumulatively unacceptable to us as hospital consultants and we therefore do not believe that it is possible to safely open the urgent care and radiology services at CHI [Children’s Health Ireland] Connolly in under one week on July 31st,” it read.

The doctors sought access to a full official risk assessment submitted in early July by Dr David Vaughan, director of quality and safety, but this “has yet to be shared with us by you for our review”, the consultants told CHI chief executive Eilish Hardiman.

“The risks that are visible to us are considerable and cumulatively unacceptable to us as hospital consultants, and we therefore do not believe that it is possible to safely open the urgent care and radiology services at CHI Connolly in under one week on July 31.”

Responding last week, the CHI said it had been successful in recruiting emergency medicine consultants for the Connolly centre, but acknowledged that temporary vacancies existed “due to maternity and backfill requirements for paediatric emergency medicine posts”.

The Irish Times reported last Saturday that a risk assessment “matrix” had identified 12 separate issues, two considered to be “red” risks and 10 “amber” risks which are involved in the opening of the new urgent-care unit.

The two red-level risks set out in the document related to CHI’s inability to recruit two consultant paediatric radiologists to work at the new centre at Connolly Hospital and radiology governance issues.

CHI said last Friday that it was “using the risk matrix as a guide to work through the issues that need to be addressed to safely open services at CHI at Connolly”, adding that they were “committed to having patient safety at the centre of what we do”.