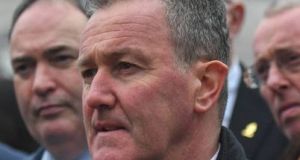 Newly appointed Northern Secretary Julian Smith will visit Belfast on Friday to hold his first meetings in his new post with Tánaiste Simon Coveney and the five Stormont political parties.

Described only as a “get to know you” encounter, Mr Smith will also be briefed by Northern Ireland Office officials on the current state of the talks to restore the executive and assembly.

The DUP and the Ulster Unionist Party broadly welcomed Mr Smith’s appointment, although the UUP has warned against the consequences of a no-deal Brexit.

Sinn Féin and the SDLP expressed concerns about Mr Smith’s previous dealings with the DUP when he was the British government chief whip in charge of relations to keep the confidence and supply agreement in play.

“Boris Johnson’s party abandoned the rigorous impartiality demanded by the Good Friday agreement in order to enter into a self-serving pact with the DUP,” said Conor Murphy, a Newry and Armagh Assembly member,

“That has proved to be a toxic partnership for our political process with the British government acquiescing to a denial of rights and equality that would never be tolerated in their own country.”

Noting the enthusiasm shown by the DUP when they learned of Mr Smith’s appointment, SDLP deputy leader Nichola Mallon said he could not be a “yes man” for any one party in the talks. She said his past relationship as an alliance-builder with the DUP posed “an immediate challenge” to Smith to demonstrate that “he is not beholden to one party ”.

Meanwhile, the DUP continues to be satisfied by Westminster’s political changes. “We welcome the fresh optimism and positivity coming from the new prime minister,” said deputy leader Nigel Dodds.

Saying that it has already had “constructive conversations” with Mr Johnson, Mr Dodd said the DUP looked forward to pursuing a “shared vision” rather than the alternative of a Corbyn government.

“Both Boris Johnson and the DUP share the vision that the Union must be strengthened, that Brexit must be delivered, and that Stormont must be restored as quickly as possible.”