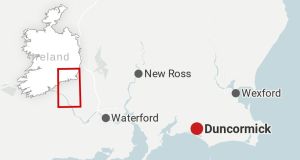 The Air Accident Investigation unit are travelling to the scene and the Irish Aviation Authority have been notified.

Two people have been killed in a plane crash in Co Wexford.

The bodies of the deceased men remain at the scene, an open field at Duncormick and is being attended by the emergency services.

Both men are believed to be Irish and one of the men is understood to be in his 50s and from the Raheen area outside New Ross town.

An Garda Síochána who are co-ordinating the emergency response were called to the scene of the accident at 5.50pm following reports that a two-person light aircraft had crashed.

Mary Parle from Ambrosetown near the crash site said “we saw the helicopter circling on and off for over an hour. It was static in the air for a time in the field next to us as if shining a light on the site.”

Ms Parle, who runs Ambrose Mews Bed & Breakfast said the crash site was about half a mile from their home “a few fields over”.

Gardaí requested the assistance of the Irish Coast Guard. Rescue helicopter R117 was tasked to check for wreckage near the site and off the coast. It has since returned to its base at Waterford Airport. The coast guard’s Kilmore Quay ground unit was also deployed and assisted gardaí in securing the area around the crash.

The plane took off from Taghmon Airfield earlier on Sunday evening.

Chairman of Wexford County Council Fianna Fáil Cllr Michael Sheehan expressed “our deep shock and sadness to the families and community of the casualties of the accident in Duncormick”.

He said that “while it is early in the stages of investigation, I would like to thank all those involved in the recovery and to especially thank the emergency services for their duty, diligence and speedy response to this emergency.”

“It’s a tragic situation and the whole town is in shock. Our thoughts go out to the families involved,” said Sinn Féin councillor for Wexford Tom Forde.

A team from the Air Accident Investigation Unit of the Department of Transport was also at the site and has begun its investigation.

In June, a builder in his 50s died after the micro-light aircraft he was flying crash landed near his home at Gowran Cross, about 10km from Kilkenny city. Richard ‘Dick’ O’Connell, a father of three and aviation enthusiast was flying on his own when the crash happened.