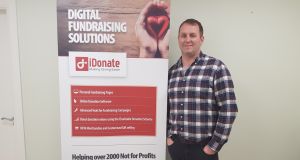 Technical Director at iDonate in Co Galway, Alan Coyne, who designed the eSign process which has been approved by Revenue

A new digital charity tax-back initiative, which could help charities receive millions of euro in additional income, has begun operation.

A Co Galway-based firm has become the first in Ireland to get permission from Revenue to introduce the new e-signature process.

IDonate, which is part of Western Webs in Tuam, has been given the go-ahead for its initiative, which involves the automation of digital signatures for people making voluntary donations of €250 or more.

Charities can receive a 45 per cent boost on all donations when donors fill in charity tax-relief forms, but previously this could only be done on paper.

Galway East TD and Minister for Rural Affairs Seán Canney had raised the issue with Revenue. The cumbersome requirement to fill in forms manually was depriving charities of additional income, he advised.

“I am delighted Revenue has given iDonate permission to use e-signatures, which will make the process much more efficient and will be of great benefit to those receiving contributions, including charities, churches and schools and all those organisations that can avail of the tax-back opportunity,” he said.

Technical director at iDonate and designer of the eSign process Alan Coyne said: “This is great news for charities all over Ireland. iDonate will alert qualifying donors to the fact that the receiving charity could be entitled to an additional 45 per cent of the value of the donation.”

The eSign initiative “makes it much easier for charities to claim millions of euro that were previously unclaimed,” he said. “We can now replace the old pen-and-paper slogan of ‘print, sign and post’ with a streamlined eSign process of ‘sign online and submit’.”

IDonate was established in 2011 to support five Galway-based charities with online fundraising but now supports more than 1,000 registered charities nationally. It is a sister site of iFundraise – the Irish equivalent of GoFundMe – which supports more than 1,500 non-profits (including sports clubs, schools, and community groups) all over Ireland. In 2019, iDonate expects to transact more than €5 million in charitable donations, which are processed by Realex Payments.

1 DUP pleads with UK to reduce salary threshold for migrant workers coming to North
2 A Russian cruiser with ‘cannibal rats’: What other ‘ghost ships’ could be out there?
3 ‘If all the immigrants go back, who will work in the meat factories and do the crap jobs?’
4 Miriam Lord: Photo-ops give way for occasional talks
5 Gardaí investigating four-lane motorway sulky race
Real news has value SUBSCRIBE