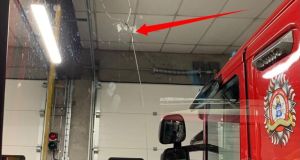 The broken glass in the cab windows of the Tallaght-based fire engine following the incident. Photograph: Dublin Fire Brigade Twitter

A Dublin Fire Brigade vehicle was damaged when it was attacked by a group throwing rocks and stones during a call-out in west Dublin on Friday night.

The Tallaght-based fire engine was extinguishing a bonfire in a housing estate near the Liffey Valley shopping centre when the incident took place.

A Dublin Fire Brigade spokesperson said the crew left the scene after a cab window in the engine was broken by rocks.

Overnight our crews & fire engine based in Tallaght had rocks thrown at them whilst attending a bonfire call near Liffey Valley. We're appealing to the community to let us do our job safely as we work to make our city safe too #Dublin #fire #community pic.twitter.com/OqvilNPGcB

The engine was out of service while repairs took place over the weekend. No members of the fire crew were injured.

While the spokesperson said such attacks are relatively rare – there were no such incidents in 2016 – they asked for more respect to be shown for fire crews carrying out their duties.

Mr Ó’Brion said a community forum and a number of “preventative mechanisms” are needed to combat anti-social behaviour.

He added only a small number of individuals are involved in such incidents and are not representative of the community.