People feeding deer unsafe food, and are at risk of injury as rutting season begins 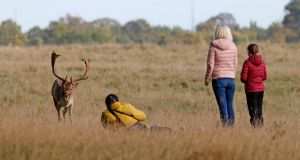 The DSPCA says people should not attempt to get selfies with deer, or feed them. Photograph: Nick Bradshaw/The Irish Times

The public has been warned to “leave wildlife alone” and not attempt to take selfies with deer, as the “rutting” or mating season begins, in places such as the Phoenix Park.

People risk getting injured, Gillian Bird of the Dublin Society for the Prevention of Cruelty to Animmals (DSPCA) warned. She said this was the time of year when deer come down from the mountains and are more visible.

The stags who have full antlers join the female herds and do battle with other stags but “some people attempt to see who can get closest to the deer” to take selfies, Ms Bird warned.

She said people risked injury but “we’re more worried about the deer”, particularly when they are being fed by people attempting to get close for a selfie.

She said deer get used to humans, associating them with food.

They feed them carrots and apples, which can get caught in their throats, she said. They have been fed sweets and white bread, which are also bad for them and sometimes they will grab plastic bags people might have in their hands.

“Dog poo bags are another problem,” which deer might grab from any owners carrying them. The DSCPA officer said horses have died from eating dog poo.

Ms Bird said that “people should leave wildlife alone” and not attempt to get close.