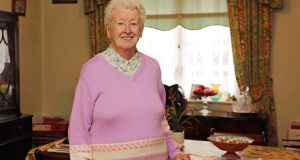 The 86-year-old Longford native had been hoping for a pensions increase, but even if the much discussed €5 increase does materialise, she will receive only €2.50 as she has a half and half Irish and UK pension.

“I do feel that pensioners are like the forgotten people. It seems like we cost so much over the years, now we’re in the way, they’d prefer if we died off.”

Ms Mulryan spent 35 years working in London and returned to live in Longford in 1998 on a repatriation scheme.

She now lives “in a lovely bungalow” just outside the town and has “lovely neighbours.”

“When I lived in London I worked very hard and sent money home. I started out in catering and then got a civil service job. It was badly paid but they treated you well and it was secure.

“I educated myself and then got a job with the Midland Bank and worked there for years before I took early retirement. After that I worked for seven years with the homeless and it was the best years of my life.”

She feels there is a need for more independent living accommodation for pensioners as many prefer to stay on their own.

“I have nephews and nieces, but some of them are in bad health. In fact I’m in better health than some of them.”

Speaking to The Irish Times from an exercise class, Ms Mulryan said it was important to get out and interact and said she tried to keep active in the community. She is involved with a local seniors club.

“I have friends on non-contributory pensions and I know they are worried about the Budget, but it won’t make much difference to me.

“We really feel as if pensioners are a forgotten race of people.”