‘Try and keep me out’: Biden officially invited to visit Ireland 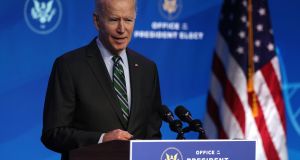 US president Joe Biden said “try and keep me out” when officially invited to Ireland, Taoiseach Micheál Martin has said.

In an interview with CNN on Friday, in which Mr Martin discussed the possibility of becoming the first head of government to meet with the new president, he revealed that he had already asked him to come back to the home of his ancestors.

“I did invite president Biden to Ireland and he jokingly said to me, ‘try and keep me out’,” he told the Amanpour programme in a near 20 minute interview that also delved into the mother and baby homes, and Covid issues.

A State visit by Mr Biden is considered a virtual certainty by many given his strong and deeply valued Irish heritage – Mr Biden’s ancestors emigrated from Co Mayo and Co Louth – but the traditional St Patrick’s Day trip by Mr Martin this year is less clear.

The Taoiseach said that no decisions had yet been made in relation to the annual White House engagement but that officials would engage and do what was safe in the context of Covid-19.

“Both of us are very keen to cement that very historic relationship between the United States of America and Ireland which goes back through the ages now,” Mr Martin said.

The Taoiseach’s remarks came not long after Minister for Foreign Affairs Simon Coveney said he did expect to visit the White House on St Patrick’s Day.

“I think it will [go ahead this year],” Mr Coveney told RTÉ on Friday. “But we have to figure out how we do St Patrick’s Day this year safely.

“As we know, parades have already been cancelled. But we will reach out in the most appropriate way we can, in the most impactful way we can, obviously while being sensitive to public health perspectives.”

The tradition of the Irish taoiseach of the day presenting the US president with a bowl of shamrocks on St Patrick’s Day dates back to 1956, and the exchange will receive renewed vigour this year given the strong ancestral ties to Mr Biden.

Mr Coveney also praised the new administration for its change of direction from the Trump presidency.

“I think it’ll be much easier now with the Biden administration that I think share our values and our approach, to go over politics and multilateralism, to be able to get things done,” he said.

“There’s a lot of work to do here but I think it makes that work a lot easier, when we share a very similar approach to the administration.” – Additional reporting, PA