After four years, a medium-sized insurrection must seem like a small price to pay 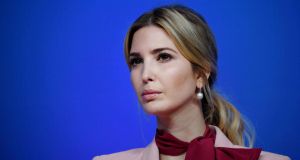 Ivanka Trump was believed to be a voice of reason around her father. File photograph: Jim Watson/AFP/Getty Images

In the twilight hours of a reality TV star’s presidency, during the throes of a deadly pandemic, MAGA thugs in combat gear, some waving Confederate flags, scaled the walls of the Capitol building in Washington DC.

They smashed windows, dangled from balconies and trawled the corridors bellowing “where the f**k are they?” Inside the Rotunda, masked police officers pointed guns at insurgents. A man in a beanie inserted himself into the dais of the Senate chamber, his fist held aloft, as he chanted “Trump won that election”.

Another, maniacally gurning for photographers, tucked a podium under his arm and scurried away.

It was a night of mayhem; of preposterous set-pieces. The history books will read as though they were scripted by Quentin Tarantino. But this was real life in the democracy formerly known – to itself at least – as the greatest on earth. Foreign Minister Simon Coveney called it “a deliberate assault on Democracy by a sitting president”. Five people died – one police officer and another woman after she was shot by police. Watching it unfold on television, it felt for a while as though the death toll might be much higher.

Meanwhile president Trump – who was, of course, also watching it unfold on television – took a break to film a video in which he gushed about his “love” for these insurrectionists. “You’re very special people”, he told them in a message posted on Twitter, which locked him out of his account shortly afterwards. By the time he was allowed back on Friday, he had decided that, no, in fact, he was actually outraged, honest.

The woman who fancies herself as America’s first female president also struggled to find the right words to express her feelings for the rioting, looting mob. “American Patriots” was what Ivanka Trump finally settled on, in a tweet in which she didn’t tell them to go home, but instead asked them to play nice. She deleted it almost immediately, but it had the desired effect, giving notice of her intention to quit her role as the much-vaunted “voice of reason” in the Trump administration. Whatever she subsequently said about abhorring violence, it told the thugs she was on their side.

There was more shock expressed about this on social media than there was about Trump’s love note to the insurrectionists, as though some people continue, in the face of all the evidence, to expect more of her. But why? Forget the voice of reason shtick: Ivanka has only ever been the voice of Ivanka.

The single contribution Melania Trump has made to American life is the nickname she bestowed upon her step-daughter. “The princess” is what she calls her. With her caramel highlights and doe eyes, Ivanka really does look as though she was sketched by Disney, Jared trotting in her wake like an anaemic Gaston. This is relevant because humans have a glitch coded into our DNA when it comes to good-looking people: we ascribe them good intentions on the basis of nothing more substantial than the symmetry of their faces. Psychologists call this “the halo effect”. The Javankas’ good looks, combined with their wealth and general air of being the kind of people who know how to pronounce “ceviche”, contributed to largely baseless assumptions by Democrats about how they would prove a moderating influence on her father, certainly more civilising than her buffoonish brothers.

There were a few promising signs that Ivanka might even have taken the “civilising influence” mandate to heart: she lobbied her father to protect LGBT rights and to keep the US in the Paris climate accord. She did something about childcare tax credits. But it all pales a bit beside the children in cages, the allegations of shady financial practices and, now, the support for insurrectionists.

The truth is that Ivanka Trump doused herself in what Saturday Night Live imagines as her own-brand perfume, Complicit (“the fragrance for the woman who could stop all this, but won’t”) and struck a match.

Over the last five years, noted Vanity Fair this week, she and Jared Kushner performed “a mincing dance around reality . . . when it suited them, they were the loudest, most trusted voices in the president Trump’s ear . . . when it was less advantageous, they shrunk out of sight.” On Wednesday, the dancing stopped.

There has been a lot of speculation in the US media about what happens next for the Javankas. Where they will go now? They can’t possibly stay in DC. Florida is an option, even if they’re a bit young for an upscale retirement village. But it would allow her to run for Marco Rubio’s Senate seat in 2022. New York could be awkward, especially after Kushner is reported to have said of the Covid crisis in the city, that its “people are going to suffer, and that’s their problem.” These articles all end up exploring the same question: if the doors to Manhattan’s more desirable dining rooms slam in their faces, will they regret have sold their souls?

Not a chance. Ivanka doesn’t care about being shunned at the Met Gala. Hers is a longer game with a far bigger prize, namely the office soon – hopefully – to be vacated by their father. Somewhat inconveniently, her brother, Don Jr, has his sights on it too. But if gender is his strongest argument, entitlement and sheer self-belief are hers. Think of the lunch invites she’ll get then. The branding possibilities. The pardons she can issue.

After four years of torching her principles and turning a blind eye to creeping authoritarianism, stoking one medium-sized insurrection must seem like a small price to pay.