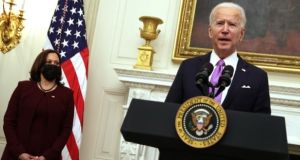 US president Joe Biden with vice-president Kamala Harris during an event in the White House on Thursday. Photograph: Alex Wong/Getty Images

In his inaugural speech on Wednesday, Joe Biden professed faith in the ability of America’s two political tribes to come together, find common purpose, to liberate themselves from the relentless war of attrition that has all but made his country ungovernable

It was a stirring vision. Let’s hope, for his own sake, that Biden doesn’t believe a word of it.

In a properly functioning democratic system, it would be taken as given that government and opposition could co-operate on issues they can agree on and compromise where they cannot. Biden himself once operated in a system like that, and excelled at making it work. In this 36 years as a senator, he became the archetypal deal-maker, famous for his close contacts with Republican colleagues and his ability to charm them when the occasion required it.

Biden’s hopes of enacting his agenda received a big boost earlier this month, when the Democrats won two run-off senate races in Georgia

As vice-president he acted as Barack Obama’s chief emissary to Capitol Hill, helping to get budgetary legislation over the line by working with Republicans who controlled both houses for much of Obama’s time in office. Every instinct in Biden’s body will tell him he can get the GOP to meet him halfway on some of his signature legislative plans.

In the beginning, Obama thought the same. Having won election in 2008 on a promise to heal America’s divisions and bring the warring factions in Washington together in a new spirit of bipartisan harmony, he was obliged to try. But if Obama, whose three years in the senate was enough to leave him with a jaundiced view of the place, was aware of the daunting task he would face, even he was taken aback by the outright hostility he would meet from congressional republicans.

Having decided that “the single most important thing we want to achieve is for president Obama to be a one-term president”, as then Senate majority leader Mitch McConnell put it, the party concluded early on that the surest route to electoral success was to stymie and obstruct the White House at every turn.

A radicalising Republican base demanded nothing less, the party leadership convinced itself. In his recent memoir, Obama writes: “One of the reasons I’d chosen Joe [Biden] to act as an intermediary – in addition to his Senate experience and legislative acumen – was my awareness that in McConnell’s mind, negotiations with the vice-president didn’t inflame the Republican base in quite the same way that any appearance of co-operation with [Black, Muslim, socialist] Obama was bound to do.” Even then, genuine bipartisanship seldom materialised.

The Obama White House spent months cultivating a handful of independent-minded Republicans in the hope that they would sign up for the Affordable Care Act and give Obamacare a patina of bipartisanship. None did. “Are there any changes – any at all – that would get us your vote?” Obama asked the Republican senator Chuck Grassley in a final meeting in the Oval Office. There was an awkward silence, Obama recalls, before Grassley looked up and met his gaze. “I guess not, Mr President.”

Over his four-year term, Donald Trump made little pretence of attempting to work with congressional Democrats, and didn’t as much as speak to House speaker Nancy Pelosi for a year after she oversaw his impeachment. Biden takes pride in his knack for cutting deals. But in Washington these days, bipartisan deal-making is about as useful a skill as knowing how to use a fax machine.

With no room for defections, Biden must placate his progressive camp while simultaneously tending to the concerns of so-called moderate Democratic senators

Biden’s hopes of enacting his agenda received a big boost earlier this month, when the Democrats won two run-off senate races in Georgia. Those victories just about give the party control of the upper house, with vice-president Kamala Harris holding the tiebreaking vote in a chamber split down the middle. That 51st vote nullifies McConnell, at least for now, and ensures that Democratic senators can control the agenda. It also means Biden is virtually assured of sealing confirmation of his cabinet and judicial nominees. But the slender majority also focuses attention on the tightrope Biden must walk within his own party, where the left fears the president’s stated wish to work with Republicans will result in legislation being watered down in a forlorn attempt to win over an opposition that has no real interest in doing business.

Near the top of the progressives’ wish-list is scrapping the rule that requires a 60-vote supermajority threshold to pass most legislation – a move that would obviate the need to work with Republicans entirely. (Tax-and-spending laws, including most of the planned stimulus measures, can pass by simple majority.)

Yet with no room for defections, Biden must placate his progressive camp while simultaneously tending to the concerns of so-called moderate Democratic senators such as Joe Manchin of West Virginia, who has said he will block any attempt to eliminate the filibuster. And for Republicans, mindful of the 2022 midterms on the horizon and with a majority of their voters convinced that Biden is an illegitimate president, all the political incentives point in one direction.

Democrats will hope that while the Biden White House calls for a truce it is quietly preparing for war.