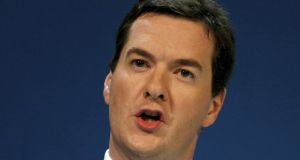 It was the casually dismissive manner in which former UK chancellor of the exchequer George Osborne wielded the knife that must have been so piercing for many unionists. His lines, written with scornful hauteur, are worth repeating.

“By unleashing English nationalism Brexit has made the future of the UK the central political issue of the coming decade. Northern Ireland is already heading for the exit door,” Osborne wrote this week in the London Evening Standard.

“By remaining in the EU single market, it is for all economic intents and purposes now slowly becoming part of a united Ireland. Its prosperity now depends on its relationship with Dublin (and Brussels), not London. The politics will follow,” he added, indifferently certain of the direction of travel.

It was strong stuff, with the implication that the North is an artistic and scientific backwater and not really part of the union

And just in case unionists missed the point, Osborne then twisted the blade. “Northern Irish unionists always feared the mainland was not sufficiently committed to their cause. Now their short-sighted support for Brexit (and unbelievably stupid decision to torpedo Theresa May’s deal that avoided separate Irish arrangements) has made those fears a reality.”

“It pains me to report that most here and abroad will not care,” he said.

And Osborne, perhaps not feeling any pain at all, ladled on the injury and the insult. “Scotland is an altogether different matter. Its history is our history,” he wrote. “Its contribution to the world through its literature and philosophy, exploration and art, is our contribution. Its departure – with no disrespect to the Welsh – would represent the end of the United Kingdom. ”

It was strong stuff, with the implication that the North is an artistic and scientific backwater and not really part of the union.

Osborne’s scathing comments, reinforced and reinforced again, had to be demoralising for unionists even if unionist politicians retorted that he was “yesterday’s man”. What might have been equally disheartening for them was his utterly and condescendingly certain assessment that his thoughts were in line with the bulk of British thinking on the matter.

The fact that at the time of writing no senior UK government figure had taken the trouble to reject his remarks might add to that dejection.

From the way Osborne told it, many in Britain either do not care or view Northern Ireland as somehow outside the UK, a point emphasised by a number of articles written in recent years where mainly London commentators warned that Brexit threatened the union – with the focus purely on losing Scotland and little or no mention of Northern Ireland.

'He can be as rude as he likes but he is yesterday’s man. He is clearly motivated by internal Tory frictions and he is clearly trying to settle some old scores'

It all had to be sweet and melodious to the ears of the growing body of nationalists pushing for a Border poll on a united Ireland, organisations such as Sinn Féin and the “civic nationalism” of the group Ireland’s Future.

Unionism’s way of dealing with calls for a unity plebiscite is usually to ignore them. Equally, unionist politicians were in two minds whether to ignore or to engage with Osborne’s attack. With some prompting from The Irish Times, they engaged.

Ulster Unionist Party leader Steve Aiken said it was the “arrogance” of David Cameron and his chief lieutenant Osborne in calling the Brexit referendum and believing it was a “done deal” that created the current mess.

“That he seeks to undermine the union is regrettable,” Aiken added. “But like his earlier association with David Cameron, and their woeful attempts to justify the biggest mistake made in UK politics for many decades, we should question both his rationale and motive for his recent remarks.”

Gavin Robinson, MP for East Belfast, is seen as a possible future leader of the DUP. At the start of the week he broke some ground by endorsing what his former leader Peter Robinson said in 2018 – that unionists needed to prepare for the possibility of a Border poll by making the case for the union. “I don’t expect my house to burn down but I still insure it,” Peter Robinson, no relation of the MP, said at the time.

“You can prepare for something without it being a likely or inevitable outcome,” echoed Gavin Robinson.

Robinson, in attempting to inject some fire in the belly of those anguished by the former chancellor’s assessment, said unionists should be neither alarmed nor discouraged.

“He can be as rude as he likes but he is yesterday’s man,” he said. “He is clearly motivated by internal Tory frictions and he is clearly trying to settle some old scores with colleagues for whom he has no regard. I don’t put a lot of store in what he has said.”

He agreed at least that unionists needed to stir themselves to meet the challenges ahead. And this centenary year of the union was the time to do it.

“Our job of work during centenary year is to re-energise, re-emphasise and reinforce the positive bonds that give us all the benefits that come with membership of the United Kingdom.”

Robinson predicted that groups such as Ireland’s Future would not continue to have a free run in terms of the united Ireland debate, even with the former chancellor putting extra wind in their sails, and not to mention the constitutional anxieties caused by demographic change and the Irish Sea border.

“There are quite a number of groups prepared to grow the notion of civic unionism. It is not a short-term project but it is an important one. It is not about saying ‘What we have, we hold’ but about how do we grow, how do we strengthen and how do we broaden the support and broaden the [unionist] base in Northern Ireland?”

There is indeed some rustling in the undergrowth to suggest that unionists more generally are becoming conscious of the danger to the union as expressed by Osborne. Some are learning that if they want to maintain the link with Britain they must start engaging with their nationalist and republican opponents and put up a credible and coherent pro-union argument. If Osborne’s disdainful comments can’t shake them from their torpor, what can?