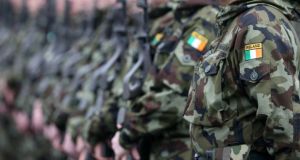 Submissions to the Defence Forces commission can be made through its website or via post. Photograph: Colin Keegan/Collins Dublin

The Commission on the Defence Forces, the body established to undertake a sweeping review of the country’s armed services, has begun seeking submissions from individuals and organisations.

Promised in the programme for government, the commission aims to perform similar a function to that examining the future of policing which initiated a broad programme of reforms for An Garda Síochána.

Focusing on a number of areas include workforce, equipment, capabilities and structures, it is expected to spearhead the greatest reform of the Defence Forces in several decades.

While established in December, the Department of Defence announced the commission’s website had gone live on Friday and invited submissions in accordance with its terms of reference.

“These submissions will form an important input to the commission’s report, which is to be submitted to the Minister for Defence by the end of this year,” it said.

Since its establishment, the commission has held two virtual plenary meetings and has held discussions with the chief of staff of the Defence Forces, the general staff, the secretary general of the Department of Defence and the department’s management board.

Further discussions and consultations are planned with personnel of all ranks, and the commission will also be engaging with the Defence Forces Representative Associations and other key stakeholder groups, the department said.

Submissions can be made to the commission by post or through its website which details how to do so. The closing date is March 5th.