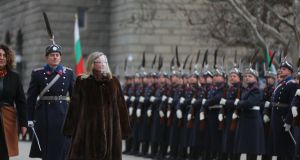 New Irish Ambassador to Bulgaria Martina Feeney inspecting the guard of honour provided by the Bulgarian National Guard in Sofia.

It’s over two years since Michael Healy-Rae’s bike was nicked above in Dublin.

Channelling Liam Neeson in the movie Taken, the Kerry TD posted a chilling warning on social media to the louser who robbed it.

“A message to the horrible thief that stole my bike outside the Passport Office in Dublin this morning. I am looking for you, I will find you and it will be a sorry day for you that you ever decided to mess with me and my property.”

He never got the bicycle back but the culprit was eventually apprehended and brought before the courts. “We never heard anything about that, but when the bike was taken some of the gutter press were trying to make out it never happened at all and I made it up just to get the publicity,” he told us yesterday.

But the good news is that Micheal will be back again on two wheels in Dublin very soon.

When that happens depends on Green Party leader and Minister for Transport, Eamon Ryan. An inescapable fact which wouldn’t fill any TD by the name of Healy-Rae with confidence. They don’t get on, as a rule.

Michael was delighted to receive an e-scooter from his children at Christmas and “he’s mad to get on the road with it”, according to his son Jackie jnr. But that can’t happen because it’s illegal to use one on a public road.

Michael’s model is called the “Go Getter” and he can’t wait to get going. “I can’t use the thing until the law changes and that’s up to Eamon Ryan. So I dunno . . .”

He went on a spin with it on Christmas day at home in Kilgarvan and he thinks the scooter will be invaluable in taking him across the city from his office in Leinster House to Dáil sittings in the Convention Centre on the other side of the Liffey. “It’s very difficult to get any work done outside of the office in Leinster House so I can see the benefit of being able to get over quickly to the other place. I’m sorry to say I think we’ll be in that Convention Centre for a good while yet because of the Covid.”

The TD got a nice surprise in the post earlier this week when Europe’s largest scooter rental operation Tier sent him a foldable helmet to go over his cap. Which seems rather odd as the company doesn’t have an Irish presence yet. That seems likely to change whenever the law changes – apparently they dispatched the helmet to Healy-Rae when a Dublin-based associate, mentioned that an Irish TD had acquired an e-scooter.

Michael says the machine is no match for his beloved Honda 50, which he only takes out on special occasions. “Nothing will ever replace that Honda 50. I used to take my mother out for a spin on it every Christmas. One year, when she was about 81 or 82 I said to her: “C’mon, I’ll put you up on the back and we’ll go for a spin into the village. She got a land when I turned in for Kenmare and we going down the road at 25 miles an hour, happy out.

“I’d be terrified to take it to Dublin in case it was stolen, ‘twould be a national disaster.”

Jackie jnr, who is his father’s PA in the Dáil and also a county councillor, is delighted with the e-scooter and the possibilities it affords. “It’s a great yoke for canvassing inside in housing estates” he says. “You can fly around from one door to the next. I’m telling you, it’ll revolutionise the way people canvass in the future.”

But not before Ryan gives his blessing.

Michael submitted a question to him for written reply on the issue and he got an answer this week. At the pace of progress in Leinster House, the answer won’t bring much comfort to the cohort of e-scooter owners who want to stay within the law (they seem few and far between if the roads and pavements these days are anything to go by).

“Electric scooters are a type of powered personal transporter (PPT). PPTs are classed as mechanically propelled vehicles, the use of which requires a valid licence, tax and appropriate insurance in accordance with section 3 of the Road Traffic Act 1961. As PPTs do not fall under any existing vehicle category, it is not currently possible to tax and insure them and there is no separate licence category for them. Therefore they may not be used on public roads and in public places. However, their use is permitted on private land with the permission of the landowner.”

Which is no use at all to a busy TD shuttling between Kildare Street and the quays.

The reply continues:“I intend to legislate for e-scooters in accordance with the programme for government this year. This involves identifying and developing appropriate amendments to primary legislation across a range of complex areas.

"Experience overseas has shown that a change of regime may have consequences for road safety, the management of roads and footpaths, the movement of traffic, public transport and goods, public health and the environment. These are all factors which must be taken into consideration when legislating.

"Until new legislation is in place, the use of electric scooters will remain illegal."

When comrades fall out

How did we miss this major news? A bitter Kick The Clique split has rocked the Irish communist movement. On Monday the Connolly Youth Movement’s ardchomhairle issued a “statement on disaffiliation” following a momentous decision to separate from the mothership after an extraordinary ardfheis to assess its relationship with the Communist Party of Ireland.

The meeting was called on foot of discussions “regarding historical contradictions and present-day events and realities.” The meeting seemed to go well, the happy upshot being “a robust expression of democratic centralism that began a new phase in an open and varied discussion on the future direction of our movement”.

But why have the baby Marxist-Leninists decided to strike out on their own? In a lengthy and detailed statement the young comrades give some of the reasons for the split. In reality, there is only one reason: “The clique”.

The movement allege the Communist Party is “dominated by a clique surrounding the main leadership that marginalises people with differing views on a regular basis . . . Isolation is used as a tool to remove good communists who are deemed inconvenient as individuals, in order to prevent dissent from amassing, and to keep others in line” .

They could be talking about Fianna Fáil or Sinn Féin or Fine Gael there.

The young communists accuse the clique of “factionalism” and of trying to purge the movement from the Communist Party. “The clique has spent a significant amount of its time engaged in a whispering campaign against the Connolly Youth Movement and its members.”

“In private, members of the clique denounce not only their own comrades but also other socialist-republican organisations in a vitriolic manner.

“The clique has led the party down a narrow, reformist cul-de-sac. It offers no vision, no strategy for realising the dictatorship of the proletariat.

“The clique has no interest in engaging with the working class and has made this very clear.

“The clique has made it abundantly clear that the sort of youth organisation it desires is one that it has total and unquestioned control over.”

The Connolly crew has no interest in “becoming a useless front group for a moribund party” favouring “dynamic action and growth over stasis and stagnation”.

The movement will not go it alone in the interest of young Irish communists. But the tireless struggle for a 32 county socialist republic continues. “We have a revolution to build and a world to win and nothing will stop us.”

To matters international now and that wonderful display of pomp and ceremony we saw this week. You can’t beat the Bulgarians for the bit of swagger.

Apart from the swearing in of IJB (Irish Joe Biden) on Wednesday, another big installation happened the day before when Martina Feeney, the new Irish ambassador to Bulgaria, presented her credentials to president Rumen Radev at a ceremony in Sofia.

Ambassador Feeney was appointed in October following four years as director of the human rights unit in the Department of Foreign Affairs. Before that she was the representative of Ireland in Palestine from March 2014 to August 2016.

The embassy in Sofia (Feeney is also Irish Ambassador to Georgia and Armenia in a non-resident capacity) issued a photograph of her excellency inspecting the guard of honour provided by the Bulgarian National Guard.

These lads know how to cut a dash. Not everybody can wear an astrakhan cap and an enormous eagle