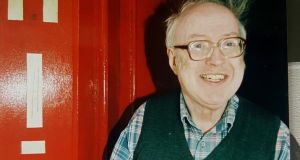 Warm tributes have been paid to well-known Cork publican Brian O’Donnell, whose unique management style of the HI-B bar in Cork city centre made it a must-visit hostelry for both locals and visitors alike.

Mr O’Donnell, who was in his 80s and died at the Mercy University Hospital in Cork on Friday, was renowned for his unique style of bar-keeping including barring customers for often what seemed like a whim from the cosy upstairs bar he ran on Oliver Plunkett St.

Lord Mayor of Cork Cllr John Sheehan led the tributes to Mr O’Donnell, praising him for developing and maintaining such a unique atmosphere in the Hi-B at a time when bars are becoming more standardised and generic in Cork as elsewhere.

“Brian was iconic in Cork – he almost became a tourist attraction in himself. I remember bringing some American visitors into the Hi-B for a drink and they were shocked when he took one of them to task after they took out their phone to check a restaurant reservation.

“I never had the honour or privilege of being barred from there myself which is something I perhaps regret because it was real badge of honour. Brian gave it a unique atmosphere and people recognised that and specifically went in there because of that.”

“As you know, he had a sign up in the bar, saying mobile phones were banned and people should talk to each other but one day having spent time in my company, he realised how much work I did on my phone so he relented and allowed me use my phone in the bar so I got an exemption.”

Broadcaster John Creedon recalled some memorable evenings in the Hi-B where the late Mr O’Donnell exhibited all his eccentricities when barring a friend of his for reading a book and some young Scandinavians for having the temerity to put some coal on the fire.

“Sometimes we’re accused of being a bit chauvinistic in Cork over our love of place but there’e no doubt, we don’t just tolerate eccentricity, we celebrate it and Brian was one of the greats.”

Author and chronicler of The Who, Jack Lyons, recalled how, when as part of Cork Capital of Culture 2005, he organised a event to celebrate the performance in the GPO in 1831 of world renowned violinist, Nicolo Paginni who stayed in the nearby Hibernian Hotel for four nights.

“Brian was a good friend so I invited him along and after the event, Brian thanked me for the invitation and handed me his business card – it was very apt... he described himself as “Well-known Mahlerphile’ - a tribute to the cranky and curmudgeonly Austrian composer Gustav Mahler. ”

Publican Philip Gillivan, of the Shelbourne Bar on MacCurtain St, said the city’s bar owners greatly admired Mr O’Donnell and many regretted they didn’t have his confidence when it came to dealing with customers.

“I think a lot of us admired what he did and most of us wouldn’t have the courage to do it. He just did what he wanted and ran the bar the way he wanted to whether you liked it or not.

“The rules were his rules and there are very few characters like that left.”

Poet Gerry Murphy also paid tribute to the late Mr O’Donnell, saying he would be sorely missed in Cork as there were few publicans anywhere who could match him for his knowledge and erudition on matters cultural or for “his brilliant eccentricity”.

“I was very fond of Brian - I was actually barred once from the Hi-B which, as you know in Cork, is a something of a rite of passage - my coat knocked against a glass as I was walking out and it broke so he made me pay for it - 50p - which I handed over and then he barred me.

“But we became very good friends as the years went on – he was a lovely man, one of the real characters of Cork.”

Mr O’Donnell, who is survived by his wife, Nancy and daughter, Rachel, will be removed from O’Connor’s Funeral Home, Boreenamanna Road on Monday at 6pm to St Peter and Paul’s Church for requiem mass at 12.30pm on Tuesday with burial afterwards at St Finbarr’s Cemetery.