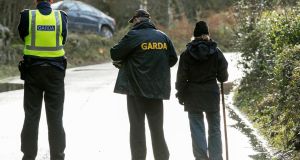 Gardaí at the scene of a traffic collision on the Laragh to Rathdrum road, following a serious stabbing of a female in Arklow, Co Wicklow. Photograph: Garry O’Neill

Gardaí investigating the serious assault of a woman that occurred in Arklow, Co. Wicklow on Saturday have charged a man they arrested earlier.

The man, aged in his 30s, is due to appear before Bray District Court this afternoon, in relation to the offence.

He has been charged with seriously assaulting and stabbing the woman in the early hours of Saturday morning, leaving her in a critical condition. The woman is described as being in her early 30s in a Garda statement.

The incident occurred in the woman’s Arklow home at about 4.25am. The injured woman is a mother of one from Arklow. Her family is well-known and highly respected within the town.

She is being treated at St Vincent’s Hospital in Dublin. A Garda spokesman said the woman’s condition has not changed overnight. It is understood the alleged attacker fled the scene in a car after a neighbour intervened.

One Arklow resident, who knows the injured woman, described her as a “bright spark”.

This person, who declined to provide their name, said what had happened was “unbelievable”.

“She is just a lovely person, inside and out. Really, really shocking. On Saturday morning news was spreading around the town that someone was missing as the search and rescue helicopter had been hovering over the town and along the beach, but then the news came through of the tragic events.”

A friend of the injured woman said: “We are just hoping and praying that everything will turn out alright. Empty and numb is the only way to describe the feeling right.”

Gardaí in Wicklow are appealing for any witnesses or anyone who may have information in relation to the incident to come forward.

They are also appealing to road users who were travelling in the Arklow area between 4am and 5am and who may have camera footage to contact them at Wicklow Garda station on 0404-60140, the Garda Confidential Line on 1800-666111 or at any Garda station.