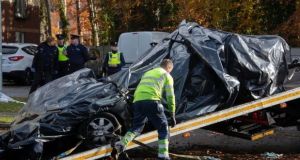 Gardaí remove the vehicle in which drug trafficker Wayne Whelan was shot and killed in Lucan. Photograph: Collins

Three people have been arrested over the murder of drug trafficker Wayne Whelan in Lucan Co, Dublin last month.

The three, two men and a woman, were arrested on Thursday and are being questioned in Dublin Garda stations.

Whelan was shot dead in a vehicle before it was set on fire with his remains inside at Mount Andrew Rise, Lucan on November 18th.

Whelan, a criminal in his 40s who lived in the west Dublin area, was involved in drug trafficking and was also implicated in murder.