Top BBC journalist honoured at Cork Person of the Year 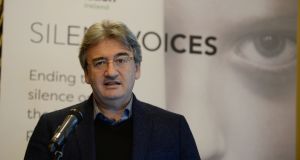 Fergal Keane: “It is the city that gave me my start in words and in broadcasting and it is the place where my heart lies forever.” File photograph: The Irish Times

Award-winning BBC Correspondent Fergal Keane today spoke of his delight at being honoured with a Hall of Fame Award at the Cork Person of the Year Awards.

Keane paid tribute to his native city and how it had helped become the person and reporter that he now is.

He is only the second person to be awarded a Hall of Fame honour and follows in the footsteps of former Irish Examiner publisher Ted Crosbie. Keane recounted the profound impression Cork had made on him as he travelled the world’s trouble spots.

“Frank O’Connor once said that he although he had left Cork, Cork had never left him. And I understand what exactly he meant . . . wherever I go in the world, whether it’s Beirut or Baghdad or Kinshasha whatever part of the world I’m in the voices and the memories of Cork are always with me.

“It is the city that gave me my start in words and in broadcasting and it is the place where my heart lies forever – because there is something lyrical, melancholy, half sorrowful about this city when you walk around it and all the memories come back when I walk around it. So thank you Cork.”

Keane said that Cork was the place in which all the formative changes in his life had taken place. And he paid particular tribute to the late principal of Presentation Brothers College, Br Jerome Kelly, who saw and nurtured Keane’s talent and steered him towards a career in the media.

“How fortunate I was to be educated by that visionary man . . . I was suspended three times and almost expelled . . . somebody who might make something of himself if he was guided in the right way.”

Paying tribute to his mother, Maura, who accompanied him to the event, for instilling a love of words in him, Keane said he was deeply moved to be honoured by the city which had produced such writers as Frank O’Connor and Sean Ó Faoláin.

Inviting the journalist on stage to accept his award, Manus O’Callaghan praised Keane – the son of acclaimed actor, the late Eamonn Keane and nephew of playwright the late John B Keane – for his fearless reporting from around the world.