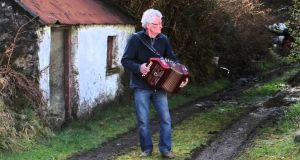 Born in London to Cork parents, Timmy “The Brit” McCarthy (second right) retained his accent when he moved to Leeside in the 1960s to work as a butcher, earning him the nickname. File photograph: Irish Examiner

It’s not every day that a crematorium heaves to the sound of dancers spinning around in a polka but then there was nothing ordinary about the send-off that family and friends gave set dance teacher Timmy “The Brit” McCarthy.

A man with a near missionary zeal to spread the gospel of set dancing, McCarthy (73) would have enjoyed the ceremony organised by his son Tony to mark his passing, with some of the finest set dancers in Cork taking to a corner of the Island Crematorium to dance a polka in his honour.

Born in London to Cork parents, Timmy retained his accent when he moved to Leeside in the 1960s to work as a butcher, earning him the nickname “The Brit”, as he became an unlikely champion of the set dancing of Sliabh Luachra and Muscrai on the Cork-Kerry border.

As he told Pet O’Connell in the Irish Examiner earlier this year, he was already involved with the Cork Folk Festival when he took a trip to Dan O’Connell’s pub in Knocknagree, but it was a journey that was to lead him from Europe to America and Australia to teach people the joy of sets.

“I went down to Dan O’Connell’s pub one day in Knocknagree. A woman called Eily Buckley saw me sitting down and she took me up and threw me round the floor. I didn’t know what the hell had happened to me, but that was the Sliabh Luachra set, and it changed my life.”

On Friday night at the Mills Inn in Ballyvourney and on Saturday at Island Crematorium in Ringaskiddy, hundreds gathered to remember and celebrate that life and sympathise with McCarthy’s partner, Rhona, his adult children, Tony, Susan and Niamh and their mother, Clair, on their loss.

Mourners watched as family and friends shouldered his wicker coffin into the crematorium overlooking Cork Harbour to the strains of some Breton airs played by musicians Youenn Peron on Breton bagpipes known as the binioù kozh, and Gwenola Larivain on the oboe-like bombard.

Inside, Tony acted as Fear an Tí and introduced McCarthy’s close friend, Dave McMahon, who recalled how he first met McCarthy at a set dance workshop in Landshut in Bavaria in 1996 when, with a red Paolo Soprani accordion on his lap, he was calling out the Blue Bonnet Polka.

“Timmy told me many times that the three women he loved most were his mother, Kitty, his wife, Clair and his partner, Rhona – he’s with his mum now, dancing a polka set with Dan O’Connell, Marilyn Monroe, Elvis Presley, Princess Diana, JFK and Jacqueline Onassis, ” he said to loud laughter.

“There are three people here today who don’t remember the first time they met Timmy – they are Tony, Susan and Niamh... they have lost not just a great friend, they have lost their flesh and blood, and I just want to repeat Timmy’s mantra to them, ‘ Love, keep positive and hate negativity’.

Among the many to pay their respects were folk singer Jimmy Crowley, former senator Brendan Ryan and Jim Walsh from the Cork Folk Festival. Earlier in Ballyvourney, Sinn Féin MEP Liadh Ní Riada and local Fianna Fáil TD Aindrias Moynihan were among those to pay their respects.

After a humorous ballad about McCarthy’s travails in trying to source poitín in Cuil Aodha, it was the turn of Tony, Susan and Niamh to honour their father when they joined with Hammy Hammond, Linda Quinlan, Ted O’Connell, Geraldine Thomas and John Herbert to dance a polka.

The crematorium, once a Royal Navy magazine store on Rocky Island, was soon heaving as the music echoed down from the high vaulted ceiling and reverberated around the usually reverential space in a fittingly physical and energetic eulogy.

And then it was time to bid farewell as Cór Cuil Aodha broke into their anthemic rendition of Sean Clarach MacDomhnaill’s Jacobite lament, Mo Ghile Mear, and the congregation rose to their feet to sing along in a poignant yet rousing tribute to a man once described as “the Inspirator”.