Man critically ill after being shot during Belfast ‘disturbances’

PSNI received report of gun being fire at 1.30am on Saturday in New Lodge Road area 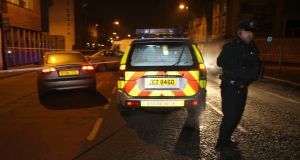 A man is critically ill in hospital after being shot in the abdomen following reported disturbances in north Belfast. File photograph: PA Wire.

A man is critically ill in hospital after being shot in the abdomen following reported disturbances in north Belfast.

The Police Service of Northern Ireland (PSNI) was called to the New Lodge Road at 1.30 am on Saturday after receiving reports of a gun being fired.

PSNI Det Sgt Corrigan said when they arrived at the scene of the incident they found that a man, aged in his 20s, with a gunshot wound to the abdomen and facial injuries.

“He was treated at the scene by the Northern Ireland Ambulance Service and transferred to hospital,” Det Sgt Corrigan said.

“We are currently working to establish the exact circumstances of this incident and would appeal to anyone who was in the area around 1:30am and saw what happened to get in touch with us.”

A PSNI spokeswoman said the victim remains in hospital where his condition is described as “critical but stable”.

“The people of the New Lodge are concerned that trouble has spilled over into the streets and caused disturbance to local businesses and homes,” he said.

“There can be no place for guns on our streets.

“Details of that attack are still emerging, but I wish the man injured a speedy recovery and clearly this incident could have had even more disastrous consequences.

“I am calling on anyone with information on either of these attacks to bring it forward to the PSNI.”