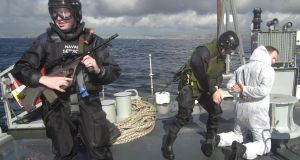 File photograph of naval manoeuvres off Roches Point, Cork. It is understood the Naval Service had been tracking the yacht that was detained on Thursday for some time.

Gardaí were continuing on Thursday night to question three men arrested on suspicion of drug trafficking following the detention of a yacht off the Irish coast in a joint operation involving the Garda, Navy and customs.

Naval Service personnel boarded the yacht and escorted the vessel into Kinsale in Co Cork where, on Thursday morning, gardaí arrested the three crew members on board, two Irishmen, aged 39 and 38, both from Co Louth, and a 37-year-old Czech national.

All three were arrested under section 2 of the Drugs Trafficking Act which allows gardaí detain suspects for up to seven days before they have to be charged or released. All three were taken to Bandon Garda station for questioning.

Meanwhile Garda technical experts began a forensic examination of the 44-ft yacht after it was moored at a secure location at Kinsale Boatyard, Middle Cove, on the eastern side of Kinsale Harbour, where it was placed under armed guard.

Specialist customs search teams or rummage crews began examining the boat on Thursday afternoon and while they have found nothing to date, sources said it may take some time to fully search the vessel, which is likely to involve opening up sealed compartments on the boat.

It is understood the Naval Service had been tracking the yacht for some time and it was detained in Irish territorial waters near the Skellig Rocks off Portmagee, south Kerry, on Wednesday by the LÉ William Butler Yeats before being escorted into Kinsale on Thursday morning.

Both the LÉ Ciara and the LÉ Eithne were also involved in the operation and both the William Butler Yeats and the Ciara remained on scene in Kinsale on Thursday, monitoring the situation.

Gardaí seized a number of mobile phones and a satellite phone and are examining their call history to see if that can assist them in their investigation while Naval Service officers are examining charts and logbooks to see where the boat had been in recent weeks as well as where it was destined for.

It is understood the yacht had been renovated relatively recently and reregistered with a new name in Toulon, in the south of France. The boat’s history and its ownership will be among the issues gardaí are expected to raise with the three suspects at interview.

The intelligence-led operation also had an international dimension with assistance from the Maritime Analysis and Operation Centre – Narcotics, based in Lisbon, Portugal, which analyses vessel movements and briefs national law enforcement agencies on possible drug smuggling.

Gardaí refused to be drawn on speculation that the yacht may have intended sailing up the west coast to either dock at some harbour there or round Northern Ireland. Its location near the Skelligs would suggest it had sailed too far north to come up the south coast of Ireland.