‘There is no social distancing’: Reopening of Forty Foot gets off to rocky start

Sunbathers and swimmers enjoy the sun, the sea and the fresh air at the Forty Foot and Sandycove, Dublin, on Wednesday afternoon. Popular amenities are, however, still subject to strict social distancing guidelines. Video: John Cassidy 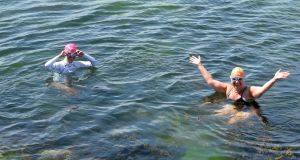 Shiobhan Weston from Sandycove and Linda Harnden from Deansgrange swimming near the Forty Foot after the bathing area reopened on the first day of restrictions being eased. Photograph: Alan Betson

For a couple of shimmering, sun-kissed minutes at lunchtime on a warm May day in Sandycove it seemed almost as if everything was okay again. Children in swimsuits played by the water’s edge, oblivious to the cold as parents decanted picnics onto rugs and bellowed at their offspring to mind themselves.

Then an older couple emerged together from the freezing, snot green sea and before they so much as draped a towel around their goose pimpled bodies, they had put their surgical face masks on.

This was no normal day at the beach and the couple coming out of the water were acutely aware of it.

“There is no social distancing being observed at all, I can tell you that,” said Robert McQuillan. He described himself as a year-round swimmer and since the lockdown he and his wife Jane have been swimming closer to their Killiney home.

But because the sea there was rough on this day, and because Sandycove had just re-opened to the public, they decided to venture a little farther afield.

As he spoke Mrs McQuillan nodded in agreement.

“It is more kids than anything, they are running all over the place. People are supposed to be coming here to swim before leaving. They’re not though. You can’t blame the children, they are just doing what comes naturally. But as an adult you would want to be deaf, dumb and blind not to know the rules at this stage.”

A man who identified himself only as David stood at the water’s edge and prepared to dive in to the water. “I was here yesterday evening and decided to come back again today,” he said.

He declined to give his full name because, he said, he lived farther than 5km from the beach he was standing on. His home was 14km away, in fact. He called out to his girlfriend, instead, to see if she would talk to The Irish Times.

“I can’t be identified either,” she said. “My boss thinks I am at work.” Then they jumped into the sea together.

Nearby three people sat side by side, separated by the required two metres – or close enough to it.

“I swim every day,” Martin Archbold said. “But it looks a bit overcrowded and my concern is that that this is a trial and if the crowds come they will simply close the place again. People are supposed to be here to swim and they go.”

His swimming buddy Michael Forde nodded. “I haven’t even got in yet. It is too packed here, it is crazy, this is not what it should be. Mind you, you can understand why people want to be here because they have all been cooped up at home for weeks.” Then he went off for a walk having decided to give the swim a skip for now.

Around the corner from the small stretch of sand, is the Forty Foot. Signs billowing in the wind on the approach reminded people of the need to socially distance and to “swim and go”. The 40 or so teenagers sitting around clearly didn’t see the signs or if they did, they had taken the decision to ignore them. They weren’t too gone on social distancing either.

They sat huddled together in distinct tribes. Some were drinking cans of lager, others were listening to Michael Jackson on a boombox, partying like it was 1979.

Maria Quintilla, another hardy swimmer, looked at the large group with disapproval in her eyes. “I am actually afraid of the sea,” she said. “But it is important to fight your fears. It helps you build confidence and the sea water is really good for the immune system.”

While she was concerned about the influx of young people, she was more relaxed about the families gathered nearby. “I think people have been very respectful and keeping their distance.”

She started a conversation with a group of fellow swimmers.

“I have called the guards,” one said. Then they all looked out over the water towards Dollymount across the bay.

Back at the entrance to the Forty Foot, a man in loud shorts emblazoned with a popular cola brand swigged deeply from a glass bottle of cider and sauntered over to where his friends were relaxing in the sun.

Minutes later two squad cars arrived at the scene. Two gardaí climbed out of one and strolled along the little beach asking people where they lived and reminding them of the need to move on. The other gardaí approached the group of younger people at the Forty Foot changing area and asked where they were from. “Blackrock, ” said a boy from Clondalkin.

If the gardaí didn’t believe him they didn’t let on. It was all pretty relaxed and within minutes the groups in both sections had largely dispersed leaving it to the swimmers and the seals. The wind was picking up by then anyway.