Pricewatch: Coronavirus has given us four categories of shopper

The EY Future Consumer Index points to an increase in ‘buying local’, and more time reflecting on purchases before people go shopping 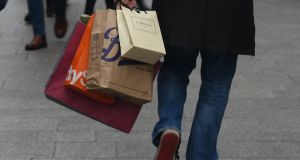 Over the last two months the speculation about where we are now and just how we will be scarred by the Covid-19 pandemic and the resulting economic collapse which – in an attempt to coin a phrase (and take David McWilliams on at his own game) Pricewatch has decided to call the Covession – has been endless.

It is not hard to see why so many people have invested so much time and energy – and money – into trying to work out what might happen in the next phase of the Covession. It is because no one really has a clue.

We have never been here before, and a public health crisis of this all-encompassing scale has never been tackled – or at least not since the wildly-misnamed Spanish Flu epidemic of 1918 which actually originated in the US.

The latest organisation to assess the economic ruins left behind by the pandemic and to look into the fortune telling runes to see what might happen next are the people at Ernst and Young – or EY as they are called.

The first EY Future Consumer Index was published recently, and it tracks consumer behaviour and sentiment as a result of Covid-19. It places consumers in four categories: “cut deep”, “stay calm, carry on” ,“save and stockpile” and “hibernate and spend”.

All told, 27 per cent of consumers fall into the “cut deep” segment, and they are spending less as the pandemic impacts employment.

The “stay calm, carry on” category are continuing to spend as normal and represent 26 per cent of the population.

The largest cohort are the “save and stockpile” group who represent 35 per cent of the market and feel pessimistic about the future.

Then there are the “hibernate and spend” cohort who are spending more across the board – this group make up 11 per cent.

“This is really a tale of two groups of Irish consumers; those that can’t or won’t spend as they wait to see how this pandemic unfolds socially and economically, and those that are using any available outlet to spend – using online shopping, local shops, and social media to have their ‘shopping fix’ met,” says Yvonne Kiely, the head of EY-Seren Ireland.

EY looked more closely at the segments, and pinpointed some age-related, family and employment trends. “Cut deep” consumers are mostly over 45. These people have seen the biggest impact on their employment status, with almost a quarter having lost their job either temporarily or permanently. Just over three-quarters of this cohort are shopping less frequently, while almost two-thirds say they are only buying essentials. A third said brands were far less important to them in the current climate.

We are likely to see an increase in people ‘buying local’ and, even more interest in transparency around the farm-to-fork and maker-to-model journey of our goods

The “stay calm, carry on” cohort do not feel directly impacted by the pandemic, and are not changing their spending habits.

The “save and stockpile” segment shows particular concern for their families and the long-term outlook, with more than a third spending more on groceries and almost three-quarters spending less on clothing, while 85 per cent are spending less on leisure .

The “hibernate and spend” are primarily aged between 18-44, and while these consumers are said to be most concerned about the impact of the pandemic only 40 per cent say they are shopping less frequently. And while 42 per cent told researchers that the products they buy have changed significantly, 46 per cent of them say brands are now more important to them.

“From the point of view of consumer behaviour, we expect a long-term shift of perspective in people who are 45 years or older, who are in the “cut deep” segment,” Kiely says.

“These consumers have had maybe eight years of income improvement since the last recession, but they remember the experience of having no access to funds and being really challenged to cover the basics like paying the bills and putting food on the table for themselves and their families.

“With that in mind it’s understandable that this group are being ultra-cautious in their spending, and will continue to be so for years to come.”

She says there has been an “interesting shift is how we will view time, talent and natural resources”, and will regard them as “increasingly precious, with traditional notions of status receding, replaced by purpose and social good”.

“We are likely to see an increase in people ‘buying local’ and, even more interest in transparency around the farm-to-fork and maker-to-model journey of our goods.

“The whole value ecosystem around packaging efficiency, the validity of brands, and the ease of accessing, assessing and buying goods and services will also be under scrutiny.”

She says that as we become increasingly aware of time as a precious commodity “we will begin to further assess effort versus reward”. The Irish consumer will be more discerning, and will ask “Is this purchase really worth my effort?” and “Do I need this item?”

“The more work a consumer has to do to buy the more time there is to reconsider the purchase. Consumers will spend less time lingering while shopping, and will spend more time reflecting on purchases before they go shopping – especially with the ability to compare and contrast online shopping items.”

She suggests that Irish sentiment is broadly in line with has happened in other markets, but other countries may not have embraced digital offerings as prolifically as Ireland has.

“Similar to other regions, we are seeing a shift in attitudes around the idea of value exchange on data and the usage of our data, particularly in the areas of health.

“Before Covid-19 we found that 54 per cent of consumers would make their personal data more available if it helped to monitor and track an infection cluster and the pandemic has no doubt accelerated this.”