Lockdown: the privileged few versus the ordinary many?

Pandemic restrictions becoming a new front in the culture wars 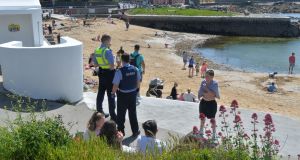 Gardai check addressed of visitors to Sandycove after it and the 40ft reopened on the first day of Covid 19 Restrictions being eased.Photograph: Alan Betson / The Irish Times

It seems that nothing is safe from our proclivity for division and conflict. The large-scale culture war that emerged in Britain between Leavers and Remainers – the elite and the working man – over Brexit has now been overtaken by the politics of lockdown.

It has become something of a religion, ready made with its very own zealots and heretics. Where we once dwelled on the cultural dichotomies spurred by the likes of Make America Great Again and Take Back Control, we are now being treated with a vitriolic division between the so-called lockdown sceptics and believers.

And as the world now slowly emerges from more stringent restrictions – with varying degrees of speed and success – the ideological dividing lines are beginning to reveal themselves.

An oped piece in the Guardian recently noted that while not all Brexiters were lockdown sceptics, “almost all lockdown sceptics are Brexiters”. Plenty of ink has been spilled on the crossover between climate-change denial and lockdown detractors. And it has not eluded the grasp of many commentators that Britain’s most vocal anti-lockdown politicians have emerged from the right-wing libertarian tradition.

It may well be true that we can deduce broader political instincts from someone’s rejection or embrace of lockdown. In the UK, many of the sceptics populate the opinion pages of the Telegraph and the Spectator. Journalist Matt Ridley (infamous for climate-change scepticism), Toby Young (general secretary of his Free Speech Union), along with the Conservative MPs Steve Baker and David Davis (both members of the Eurosceptic European Research Group) are all cited as the standard-bearers for the anti-lockdown cause.

And so too in the United States do general attitudes to the pandemic response seem to fall along distinct political lines. As the debate over there seems to currently be playing out over the proprieties (or lack of) of wearing a face mask, academic Tom Pepinsky found that Democrats were 20 per cent more likely to wear one than Republicans, while while noting that mask-wearing was consistently less common, across the board, in states that voted for Trump.

But is this a crass rendering of where these ideological battle lines are being drawn? There is no doubt that the libertarian instinct to reject large-scale state intervention informs vast swathes of lockdown scepticism; and so too is it unsurprising that those who raise their eyebrows at the very existence of climate change are perhaps a little wary of scientific advice mandating them to stay at home indefinitely.

We are perhaps glossing over rafts of people whose political inclinations do not fit into the rather extreme categories drawn above. To name but a few: working parents who have an interest in schools reopening; young people (for whom the virus poses little threat) who are dismayed at the prospect of spending their university careers behind a laptop screen; and those of a more moderate political tradition who are rightly concerned about the economic impacts on future livelihoods.

It may be reasonable to consider these concerns as secondary to the all-the-more-pressing case of halting the spread of Covid-19, or perhaps to even cast them as selfish. But we ought to acknowledge that there are plenty of other factors at play in this new culture war that has taken hold – factors that do not fit so neatly into comfortable narratives and lazy pastiches that might inform our political biases.

Of course, as in any culture war, there are two sides. We are not just witnessing the lockdown zealots typifying the sceptics as motivated by selfish political ideology. The sceptics in turn are lambasting the proponents of the policy as the privileged few – those who can endure lockdown thanks to the benefit of big houses with gardens, and the critical ability to work from home with no questions over their job security.

The usual suspects in the press casts these people as curtain twitchers, all too happy to tell on their neighbours, and unconcerned about the emergence of an overweening police presence. Rather than motivated by a natural instinct for compliance or perhaps even legitimate fear, they are stereotyped by their detractors as unconcerned about protecting civil liberties, or uninterested in the potentially crushing economic impact the pandemic might have for years to come.

There is nothing edifying about atomising the lockdown debate into a crass binary of the privileged versus the ordinary man; the right-wing zealots versus the compassionate rest; or those who reject science and those who believe in it. But it is perhaps no surprise that we have ended up at this point. It seems that reverting to the comfortable surrounds of a culture war – if the best part of the past decade is anything to go buy – is what we do best.

1 Former Kilkenny hurler dies after bike struck by tractor
2 Why you still can’t have a European holiday this summer. Or can you?
3 One of most powerful images of War of Independence
4 Theatre-training legend Betty Ann Norton dies in Dublin
5 America is not broken, it was built this way
Real news has value SUBSCRIBE