Priest describes funeral Mass on Easter Sunday with only two mourners. ‘That was exceptionally sad’ 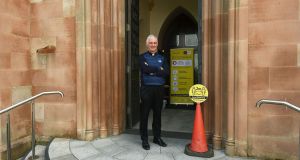 At St Columb’s Church in Derry’s Waterside, the doors are open for the first time since March 8th. A parishioner enters, wearing a face mask; inside is a bottle of hand sanitiser and a banner reminding him to keep his distance.

“There is a sensation of something returning to normality,” says one woman. She has been going to daily Mass since she was 14; she is now 78. “It always started my day well for me, and it was hard not being able to go.”

Now, she says, there is a sense of “drawing together”. Returning to the church brought peace and comfort. “I find it very consoling.”

The easing of the lockdown began in the North this week. Churches have been permitted to reopen for individual prayer since Tuesday, provided they can put the required social distancing and public hygiene measures in place. Drive-in services are also permitted as long as those attending remain in their cars.

For parish priest Father Michael Canny it has been a relief to reopen the doors. One of the first people who came to pray was an elderly woman who had been at home for the last two months.

“Many of the people who come to the church are very aware of their own vulnerability,” he says. “Some of them have not been out of the house for a while; they are very aware of social distancing, and they don’t stay a long time.”

He feels the greatest impact of reopening the churches is psychological. “It’s a big step in people’s minds.”

While Mass has moved online, he has missed the daily routine. “The mornings are long. There are no Masses to go to, no schools to visit, and nobody coming and going.”

He describes a funeral Mass on Easter Sunday with only two mourners. At another, two days later, there were only three.

“That was exceptionally sad. You couldn’t shake hands, or spend time chatting about the people’s lives. That was the real loss of this – the drinking of the tea, the listening to stories, hearing about the people that they were. These are people who would have had hundreds at their funerals, and we and their families have been deprived of that.”

It is not yet clear when Masses might resume. The resumption of gatherings, including church services, is included in stage four of the Northern Executive’s plan for exiting lockdown. The North is currently in stage one, but the North’s First Minister, Arlene Foster, has said it is being kept under review.

In the Church of Ireland, the Bishop of Derry and Raphoe, the Rt Rev Andrew Forster, said that while churches tended to be open only for corporate worship, parishes that wished to reopen were looking at how this could be done safely.

“Though the doors are closed, the church is very much open, with lots of people connecting online,” he said.

Derry parishioner Patrick Sweeney, a daily Mass-goer for the last 35 years, turned to online Mass during the lockdown but it “wasn’t the same”.

Ciara Quigg agrees. “It’s the anniversary of an aunt of mine, and my mother and father are shielding, so I was able to come and light candles. You did miss being able to come and say your prayers.”

From a safe distance, Fr Canny watches her leave. “Churches are living buildings. It is nice having a bit of life about the place.”