Taxi restrictions on College Green ‘pushing problem up the road’

Dublin taxi drivers face new restrictions to College Green during the morning rush hour, these restrictions could become permanent if An Bord Pleanán and Dublin City Council move forward for plans to a traffic-free civic plaza at College Green. 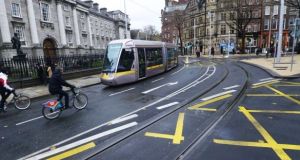 A Luas tram at College Green, Dublin. Taxis have been banned from travelling south through College Green from 7am to 10am. Photograph: Cyril Byrne

A ban on taxis travelling south through College Green during the morning is “only pushing the problem up the road”, and will create traffic bottlenecks elsewhere, the National Private Hire and Taxi Association (NPHTA) has said.

Christopher Humphries, of the NPHTA, was speaking in response to a ban on taxis travelling south from 7am to 10am, which came into effect on Monday.

The morning ban is to cut down on congestion created after the launch of the Luas cross city project in December, and several bus routes have also been diverted from moving through College Green.

The ban came into effect as An Board Pleanála holds an oral hearing on Monday on plans to ban traffic, buses and taxis from College Green to create a plaza.

Taxi drivers held a protest outside of the Gresham Hotel, where the hearing on the plaza plans is being held.

The potential permanent ban on taxis if the mooted plaza goes ahead, will solve the congestion created by the extended Luas lines, but create problems for “everybody else”, Mr Humphries said.

Mr Humphries said the ban will lead to longer journeys and more expensive fares for passengers, particularly those travelling to areas like Temple Bar, Grafton Street, or city centre hotels.

The National Transport Authority (NTA) has said the taxi restriction is needed to “ease congestion and relieve pressure by freeing up space for the other public transport modes”.

The volume of taxis travelling through College Green is “much larger” during the morning commuting hours than the NTA estimate of 150, Mr Humphries said.

Dublin Bus has described the plans for a plaza as “socially regressive”, because if buses were banned from crossing College Green passengers from disadvantaged areas would have farther to walk to reach the city centre from their final stop.