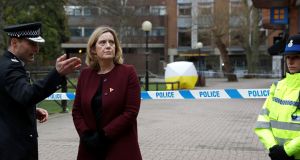 Britain’s home secretary Amber Rudd visits the scene where Sergei Skripal and his daughter Yulia were found after having been poisoned by a nerve agent in Salisbury. Photograph: Reuters

Almost 200 military personnel will join police in investigating the poisoning of a former Russian spy and his daughter, as Moscow denied any role in the incident. Police requested military help in removing vehicles from the scene where Sergei Skripal (66) and his daughter Yulia (33) were found slumped on a bench last Sunday.

The move came as it emerged that a police officer who fell ill after he arrived on the scene in Salisbury on Sunday may have been contaminated by the nerve agent later when he visited the Skripals’ home. Former Metropolitan police commissioner Ian Blair said this suggested that Mr Skripal and his daughter, who remained critically ill on Friday night, may also have been contaminated in their home.

“Clearly what they’re trying to find out at the moment is how was this delivered personally. There obviously are some indications. The officer – I’m very sorry he’s been injured – has actually been to the house, whereas there’s a doctor who looked after the patients in the open who hasn’t been affected at all. There may be some clues floating around in here,” he told the BBC.

British authorities have declined to speculate on who was responsible for the attempted murder of the former spy, who was convicted in Moscow of passing secrets to British intelligence and was released as part of a spy swap in 2010. They have said the nerve agent was a rare one, a fact that Lord Blair said should make it easier to trace the culprit.

“If this is rarer than sarin and VX it’s basically possible to identify the laboratory in which it was made. They would be able to establish where it came from – the level of authority is another matter,” he said.

Home secretary Amber Rudd on Friday went to the scene in Salisbury where Mr Skripal and his daughter collapsed. She also visited Salisbury District Hospital where the two Russians are being treated, along with Nick Bailey, the police officer who was contaminated.

“In terms of further options, that will have to wait until we’re absolutely clear what the consequences could be, and what the actual source of this nerve agent has been,” she said.

“We have to give the police all the space they need in order to collect all the information, to secure and to be able to be absolutely clear that there is no further risk.”

Russian foreign minister Sergei Lavrov on Friday described suggestions that his government was behind the attack as “pure propaganda” and a “whipping-up of hysteria”. He rejected any comparison of the attack in Salisbury this week with the murder of former KGB officer Alexander Litvinenko in London in 2006.

“We have not heard a single fact – we only see reports on television where your colleagues, with serious faces, say pompously that if it’s Russia then the response will be such that Russia remembers it forever,” he said.

“I would like to issue a reminder that the investigation into Litvinenko’s death, the blame for which was also placed on the Russian Federation, has not been brought to a conclusion thus far.”

A presenter on Russian state television on Thursday warned “traitors” and critics of the Kremlin not to move to England because they risked dying in mysterious circumstances.

“Whatever the reasons, whether you’re a professional traitor to the motherland or you just hate your country in your spare time, I repeat, no matter, don’t move to England,” Kirill Kleymenov said.

“Something is not right there. Maybe it’s the climate. But in recent years there have been too many strange incidents with a grave outcome. People get hanged, poisoned, they die in helicopter crashes and fall out of windows in industrial quantities.”