Former taoiseach says Ireland should be ‘proud’ of Eighth Amendment 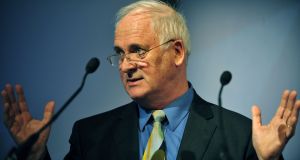 Former taoiseach John Bruton has spoken strongly against repeal of the Eighth Amendment and said that Ireland should be “proud” of having protection of the unborn child enshrined in its constitution.

A referendum will be held in May on the Eighth Amendment to the Constitution, which places an equal right to life on the unborn child and the mother, thereby prohibiting abortion almost all cases.

It follows the recommendations of the Oireachtas Joint Committee on the Eighth Amendment of the Constitution that the amendment be removed and legislation introduced to allow for unrestricted abortion up to the 12th week of pregnancy.

Mr Bruton said on Sunday that, before birth, babies can “feel” and are already developing their strength.

“To arbitrarily say that, after whatever number of weeks, it’s okay to suppress that life is just not in accordance with the values of charity towards the weak in our communities that have exemplified the Irish over the last many centuries.

“It’s true that we are probably one of the few countries in the world that has, in our constitution, an express recognition of the right to life of the unborn child, but that’s something we should be proud of,” he said.

The former Fine Gael leader was speaking after attending with his wife Finola the episcopal ordination of the new Bishop of Ossory, Dermot Farrell, in Kilkenny city. Bishop Farrell was parish priest of Mr Bruton’s home parish, Dunboyne in Co Meath, until his appointment to Ossory.

He confirmed that he “won’t be voting in favour of repeal” but did not want to make a prediction as to how the referendum will go. “Clearly there are divided opinions about this. I think if you accept that a child, before birth, is human then you have to ask yourself as a human, does it have human rights? If it is to have human rights, then surely the first right it must have is the right to life.”