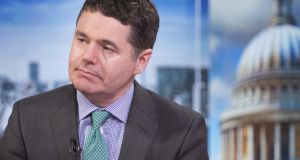 Minister for Finance Paschal Donohoe maintains that the Government can meet the timeline to hold the referendum to repeal the Eighth Amendment on May 25th. Photographer: Jason Alden/Bloomberg

Minister for Finance Paschal Donohoe maintains that the Government can meet the timeline to hold the referendum to repeal the Eighth Amendment on May 25th.

The issue has already been debated in depth through both houses of the Oireachtas and in the Citizens’ Assembly, he told RTÉ’s Morning Ireland.

Any political representative who wishes will have an opportunity to speak on the subject in the Dáil and Seanad, he said.

Repeal is necessary to assign the primary responsibility for regulation to the Oireachtas added Mr Donohoe.

“What will take its place? The role of the Oireachtas will be recognised as the primary legislative body in this area.

“To recognise the ability of women and mothers to make decisions on this most private of matters in the best way possible.

“We need a legal framework to reflect the anguish the sensitivity involved and allow a balance in the role of the State and role of mothers and women.”

Mr Donohoe said he will be supporting the Bill as the Government needs to recognise the right of women and mothers to make this decision.

Any changes to legislation in the future would be the decision of politicians elected by the people, rather than through the Constitution.

The minister said this would then be the same as for “many other hugely sensitive policy areas”.

He said there will be regulations in place and Minister for Health Simon Harris will be bringing forward a policy paper to recognise best practice in this area.

Mr Donohoe said it was a matter for individual Fine Gael politicians as a matter of conscience to proceed as they see fit.

The Taoiseach recognises that this is a matter of conscience, he said.

The Minister also commented on Project Ireland 2040 which he is promoting at a roadshow today. Content of the plan has now been viewed four million times online.

“There is a thirst for our citizens to how we can better plan for the future.”

He acknowledged that the roadshows today will cost “thousands”.