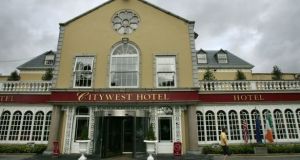 In one of the more expensive moves the Government rented the Citywest Hotel and Convention Centre in Saggart, Dublin, for €21 million on a lease which was to run out at the end of December. Photograph: Frank Miller

Surplus hotel accommodation and other facilities for use in battling the coronavirus pandemic is still costing the State millions of euro, even as much of it remains unused.

In one of the more expensive moves the Government rented the Citywest Hotel and Convention Centre in Saggart, Dublin, for €21 million on a lease which was to run out at the end of December.

The hotel was to be used as a community self-isolating centre and coronavirus recovery centre, providing 756 rooms with the added potential of 450 beds in the convention centre, for a period of seven months from March.

However, there have been just 586 admissions to date and on June 22nd the Government exercised a break option, and will relinquish the hotel and convention centre on October 22nd.

Three hotels in Temple Bar – Handel’s Hotel, Temple Bar Hotel and Riverhouse Hotel – were contracted to supply 105 rooms between them at a cost of up to €105.72 per night. There have been just 108 admissions to date and the lease runs out on August 4th, subject to extension if required by the HSE.

Garnish House, a 21-bedroom guesthouse on Western Road, Cork, was acquired for use from April to July at a flat rate of €122,000. The 21 rooms have been in use since the lease commenced.

The University of Limerick Sports Arena was acquired from June 8th to August 31st. Up to 30 of the 84 available beds have been used on a weekly basis. The HSE said if it is used beyond September 1st a licence fee of €93,000 per month will arise.

Other properties acquired include at the National Show Centre, in Swords, Co Dublin, at €4,500 per week, as well as a guesthouse at Waterloo Road in Dublin for €25,000 per month. Less expensive properties were acquired in Shannon, Clare, Kerry and Sligo.

The figures were provided on foot of parliamentary questions to Aontú TD Peadar Tóibín, who said the details painted “a very worrying picture”, adding that serious questions remain over HSE spending.

“The problem with Fine Gael in government is that while on one hand they will purport to be a party of economic prudence, they are very generous in spending other people’s money and prone to massive, avoidable overspends on contracting projects, while looking scornfully at our heroic nurses and pretending they’ve no money for them.”