Project delayed by a dispute between the State and Bam, over Covid-related costs 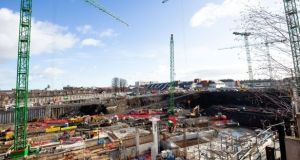 The Taoiseach had said builders should ‘get back on site and start building the children’s hospital because the children of this country need it’. Photograph: Tom Honan

The developer behind the national children’s hospital in Dublin has said it will resume works on the site next Monday.

Bam Ireland made the announcement on Friday night following sharp criticism from the Taoiseach earlier in the day.

The project had been delayed by a dispute between the State and Bam, over the costs of resuming work under Covid-era safety regulations.

In a statement on Friday night, a spokesman for Bam said it would resume works “in good faith, following robust communication with the Board and in the interest of completing the project as quickly and economically as possible”. He said work would recommence “with the safety of all stakeholders as the top priority and with full implementation of the Government’s mandatory Covid-19 restrictions”.

“We look forward to a successful resumption and getting this vital project moving, notwithstanding all of the challenges that are not of our making,” the spokesman said.

Earlier on Friday, Taoiseach Micheál Martin had said he was “quite annoyed at what has transpired” at the project.

“Why is it the children’s hospital site (is) one of the few if only sites that work hasn’t recommenced? Work has recommenced on construction sites all across the country. People have gone back to building. It’s unacceptable in my view what’s happened here.”

He said builders should “get back on site and start building the children’s hospital because the children of this country need it”.

“I’m angry about this and I think they should get back on site.” Mr Martin would not be drawn on contractual matters, or whether the State would seek to re-tender the project if a resolution with Bam could not be reached.

The main contractor developing the new national children’s hospital had said on Friday morning that it was “unfair” that it is not being offered compensation for the additional construction costs on foot of Covid-19 public health restrictions and that the issue needs to be addressed urgently.

The National Paediatric Hospital Development Board said on Thursday the company should return to the site “without delay” and the matter should be put to the dispute management process in the meantime.

Separately on Friday afternoon, the Taoiseach confirmed that face-coverings would become mandatory on public transport from Monday, with regulations being signed in tonight. He said he hoped compliance would be achieved among the population without the need for enforcement, but that transport providers would be able to refuse access to buses and trains for those not wearing masks, and the garda would be called if the situation demanded it.