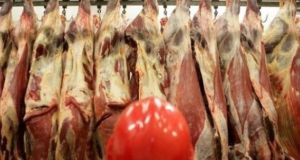 Meat Industry Ireland confirms there have been 1,100 positive Covid-19 cases at 22 of the 50 meat plants since the outbreak. Photograph: Bloomberg

“That was the decision of the HSA and was in no circumstances influenced by any pressure that we may have put on it, which we did not,” said Philip Carroll, the chief executive of Meat Industry Ireland.

Warning was given, he believed, because the HSA did not want to take risks of the virus spreading. “In essence, the HSA decided that it was better to notify plants that it was coming rather than to appear on their doorsteps,” he said.

However, the Migrants Right Centre of Ireland was highly critical of the advance notice, with its director Edel McGinley saying that it “cannot be overestimated how important unannounced inspections are”.

“Announced inspections gives time for people to hide things, get workers out of the way, give troublemakers the day off. Workers need to be talked to and that takes time,” she declared.

Meanwhile, Mr Carroll said plants currently had no active coronavirus cases, and 97 per cent of the 1,100 staff affected by the virus at 22 of the State’s 50 meat plants have returned to work.

The Migrant Rights Centre Ireland said it is “gravely concerned” that workers’ coronavirus test results were shared with employers before they were told if they had contracted the virus.

Speaking to the Oireachtas committee, Ms McGinley said the sharing of information was a “gross and serious breach of confidentiality” and proof of “institutional racism and discrimination” in plants.

Later, Mr Carroll agreed that staff should have received their test results before their employer, but said some “people may not have been contactable” and decisions were made to curb further spread of the virus.

Criticising the HSA for “a very inconsistent approach”, Ms McGinley said it had failed to inspect meat plants before May, even though complaints had been made in April.

Just 13 of the 68 migrant meat workers surveyed by MRCI had access to sick pay, while a significant percentage did not have a work contract, or did not know if they had one, or had a contract that did not reflect the hours they did.

A majority did not know the health and safety officer in their factory, while, more than two-thirds felt their employer had not done enough to prioritise their safety during the pandemic.

The lack of clear multi-lingual messaging around coronavirus safety measures in an “intimidating” work environment created confusion among staff during the pandemic, said Ms McGinley.

Migrant workers from outside the European Union are “essentially tied to their employers” because of work permit rules and find it difficult to move jobs because they fear they could be deported, the migrants centre argued.

Repeatedly asked if workers had contract rights to sick pay, Meat Industry Ireland senior director Cormac Healy, said some companies offered it, some did not: “I don’t know the overall position across the industry,” he said.

Mr Carroll said he was uncertain why large virus clusters had occurred in some factories and not in others, but he argued that the industry had “worked tirelessly” to protect employees.

“At no point was there any sense of there being a lapse in the care and responsibility of staff,” he said, saying that plants had introduced mitigation measures weeks before the State went into lockdown.