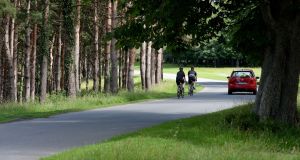 A change of season was in the air at Phoenix Park on Friday as early morning walkers were greeted with a stiff northerly breeze whistling down Chesterfield Avenue.

It seemed a long way from the sunny days of last month when the park served as an oasis of calm – what locals described as one of the few good things to come from the coronavirus lockdown.

The dry and fine weather coincided with the closure of all the side roads to the park to traffic, reducing the main thoroughfare of Chesterfield Avenue to a trickle and leading to an increase in cyclists and pedestrians on the park’s roads and paths.

On Friday morning, just hours after the surprise announcement by the Office of Public Works (OPW) that the side entrances would reopen, there were still signs that not everything was back to normal.

At the Parkgate Street entrance, there was no great queue of cars seeking to access the city centre at morning rush hour and parking along Chesterfield Avenue remains prohibited.

Many users of the park and cycling and walking campaigners had hoped the status quo would remain and that the park would remain closed to traffic with the exception of Chesterfield Avenue.

But the Minister of State with responsibility for the OPW, Patrick O’Donovan, said the Phoenix Park remained a vital commuter route for west Dublin and surrounding counties “whether we like it or not”.

He acknowledged there were many voices for and against reopening but there was a notable increase in traffic volumes in the city recently “and we also can’t ignore the fact that by the end of August the schools are going to be reopened and we would then be dragged into a decision, probably in haste, to open the gates without knowing what impact it’s going to have in the longer term”.

The decision caused an early row in the Coalition with Green Party TD Neasa Hourigan complaining that the decision had turned every route through the park “into a rat run”.

Anthony Thuillier, who lives in nearby Montpelier Hill off Infirmary Road, described the park as “a lifesaver” during the lockdown. “We have a small garden,” he explained.

“For about eight weeks it was like a paradise because it was just so sunny. There’s almost nostalgia for [the initial] lockdown,” he added, while out walking with his children Chloe (5) and Harry (3) and the family dog Charlie.

Another dogwalker Darcy Bowman was dismayed by the news. “Only a few days ago they [the OPW] was prioritising walking and cycling and then they have decided they are opening it up without any consultation. Driving through the park is one thing. Driving to the park is another,” he said.

“It’s been so nice. Chesterfield Avenue is always going to be busy, but as soon as you go left at the first roundabout, it’s been so lovely that you can step out of the road and avoid each other.”

The Islandbridge Gate, which allows commuters to access the southside through Kilmainham, was one of the gates that has reopened but traffic through it was sparse on Friday morning. There were considerably more cyclists and joggers than motorists.

Bridget Carley said, as a jogger, she wished the side gates remained closed, but as a resident of Kilmainham she wanted them reopened as the closure of the park meant a large detour to reach the Navan Road.

“We would have used the park a lot to get from A to B,” she explained

Her husband Peadar Carley said the continuing closure of the perimeter gates could no longer be justified once the lockdown was lifted.

“It was okay when there was no traffic and people weren’t out but now that the traffic is back, it is causing total disruption. There were cars wanting to access this side of the city who had to drive through Parkgate Street, into the city, over the bridge and back out again,” he said.

“All it did was turn Chesterfield Avenue into a motorway. That was a silly idea.”

The gates at either end of the avenue had remained open during the lockdown. Plans to reopen the side gates were halted on two occasions in June but as of Friday, all of the perimeter gates, with the exception of Knockmaroon Gate, which is being repaired, had reopened.