Neowise is so bright it has been photographed using mobile phones 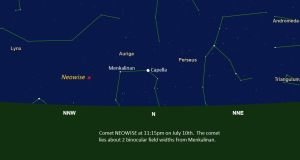 The comet Neowise will be closest to Earth on July 23rd at a distance of 103 million kilometres. Image: John Flannery

The brightest comet since Hale-Bopp a quarter century ago will blaze through Irish skies for the rest of the month.

Neowise is clearly visible even to the naked eye as it emerges from its closest pass with the sun.

The comet first arrived in Irish skies on Monday morning at 2am but is rising a half an hour earlier every night and will be visible all night from Monday.

Neowise has been described as the brightest comet in the Northern Hemisphere by astronomer Alan Hale who gave his name to the Hale-Bopp comet, first discovered in 1995 and visible from 1997, and which appeared in the sky for 18 months.

Neowise has already been photographed by many astronomers in the Irish sky. It is clearly visible though low in the sky and it is necessary to have a relatively flat northern horizon to see it. Darker skies will make it easier to see.

Irish Times sky diarist John Flannery said many observers are saying they had no problem seeing the comet with the unaided eye.

Smart phone cameras in low-light mode are capable of picking up the comet but using the manual settings on a digital camera (1 to 2 seconds at ISO ranges 800 to 3200) will record it.

Mr Flannery added: “The comet is visible all night at present but lowest on the northern skyline around midnight. In the early hours it climbs higher in the north-east sky until fading in dawn’s light around 3:45am. Because of its low altitude, anyone keen to spot it needs to find a relatively unobstructed northern horizon.

“Jupiter and Saturn are in the southeast while Mars is a bright orange point set in a barren part of the eastern sky from 1am. Venus rises about 3:15am.”

The comet was discovered last March by NASA’s Near-Earth Object Wide-field Infrared Survey Explorer (Neowise), hence its name, and reached perihelion - its closest point to the Sun - on July 3rd at a distance of 44 million kilometres.

Comets, by their fragile nature, sometimes fail to survive perihelion as the stresses from intense solar heating may cause them to fragment. Neowise has emerged intact and promises to be one of the best comets seen from here for the last number of years.

The body’s nucleus is only a few kilometres across but cannot be seen directly as it is buried in the bright coma form as material erupts from fissures on the surface.

Sunlight pressure pushes this mix of icy particles, gas, and dust outward to form a complex tail that can extend a million kilometres or more.

Reports from across Europe currently put Neowise as an easy binocular object with a stubby tail. Some experienced amateur astronomers have also managed to spot the comet as a star-like point with the unaided eye.

Because the comet is currently buried in twilight, those conditions and horizon haze makes it appear slightly dimmer than predictions.

By mid-month the comet will be in a darker sky when the Moon is absent until the early hours. Although it is likely to have faded a little by then, Neowise should still be a nice sight in binoculars and well worth seeking out a dark location away from urban areas to get a view.

Neowise is closest to Earth on July 23rd at a distance of 103 million kilometres. Unlike periodic comets like Halley, it has a 6,800 year orbit and is now heading back into the outer solar system deep freeze.

Members of the Irish Astronomical Society are going to Howth Head tonight to view comet Neowise. They plan to view it from car park near The Summit pub for 11pm weather permitting.