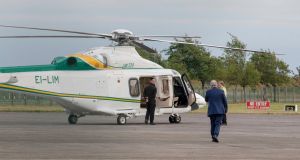 JP McManus heading to his helicopter after his jet made an emergency landing at Shannon Airport on July 7th, 2019. Photograph: Press 22

Billionaire businessman JP McManus and the staff on his private jet were “in serious danger” last year after one of its engines failed in mid-air, an air accident report has found.

Mr McManus was the sole passenger on board, along with one cabin crew member and two pilots, according to the Air Accident Investigation report published on Friday.

The engine failure occurred 15 minutes after leaving Shannon as the Gulfstream was climbing at approximately 600m per minute at nearly 555km/h hour over Waterford.

Following the failure of efforts to restart the engine, the pilot opted to return to Shannon, but had to abandon the first landing attempt after a warning about the landing gear.

A normal landing was performed on a second approach, and Mr McManus and crew disembarked normally: “No injuries were reported to the investigation,” the report stated.

Following the incident, which began at 4.45pm, Mr McManus was seen exiting and walking to his private helicopter which then flew him to his home in Martinstown, Co Limerick.