Prof Philip Nolan has said that NPHET was not scaremongering when it warned there was an need to be cautious due to Covid-19’s rising reproduction rate in Ireland .Last night he announced that the rate had increased to 'at or above 1'. Video: RTE 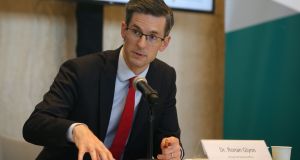 The National Public Health Emergency Team also confirmed the death of one more person with coronavirus, bringing to 1,744 the total number of deaths related to the disease in the Republic.

Reporting the figures, NPHET also said one confirmed case had been denotified, bringing the total number of confirmed cases here to 25,589.

It said work was ongoing to identify contacts the patients may have had.

Dr Glynn urged people to follow public health advice this weekend after there were large gatherings of people outside pubs last weekend and reports of many reopened licensed premises not following the Covid-19 regulations.

“Continue to protect each other using public health advice and encourage each other to make safe choices as we work together to limit the spread of Covid-19. We have all achieved so much through solidarity over the last few months, that effort must not be in vain.

“Please follow public health advice and refer to the guidance if unsure about your environment or plans.”

Meanwhile, another of NPHET’s members said it was not scaremongering when it warned there was an immediate need to be cautious due to Covid-19’s rising reproduction rate in the State.

Prof Philip Nolan, chair of the Irish Epidemiological Modelling Advisory Group, said that every new case represents a risk to an individual and those around them.

He on Thursday evening warned that the disease’s reproduction number, which measures how many people a confirmed case goes on to infect, has increased to “at or above 1”.

“The numbers are the numbers,” Prof Nolan told RTÉ’s Morning Ireland when asked about the warning on Friday. “Nothing that I have said is designed to scare people, it’s to keep the virus low in the population.”

He said Ireland was at a point in the battle against the virus where there was a need to get across the message to use caution when going about one’s business.

NPHET on Thursday reported six deaths from Covid-19 and an additional 23 cases, which it said were increasingly occurring among young people and giving rise to clusters of the disease. All of the latest cases reported involved people aged under 44, and 77 per cent were among under 25s.

This was the first time officials had seen such a concentration of cases among younger people, Dr Glynn said on Thursday. Of the 23 cases, 15 were “directly or indirectly” related to travel, he said.

Of the 140 cases that occurred last week, the median age was 34 years, compared with a median of 83 years for all cases that have occurred in the pandemic.

Dr Glynn said a “good number” of recent cases were related to travel, and to “groups having met up”. One new cluster involved nine cases and was “not a pub gathering”, he said.

He said the rise in cases was not unexpected as people moved about more. People could get on with their activities but they had to do so safely, he said. Non-essential overseas travel should be avoided.

Prof Nolan said he wanted to remind and encourage the public that they can resume some level of social and economic activity, but in a cautious manner.

“The virus remains as contagious as it ever was,” he said, adding that it was a time for everyone to show leadership. “This is not the time to be a bystander. Use any opportunity to influence.”

He said such an approach would be necessary if schools were to reopen in September, which remained a priority.

The Department of Education will today tell TDs that its top priority is to reopen all schools as “fully, normally and safely as possible at the start of the new school year”.

Not back to normal

Prof Nolan’s NPHET colleague, virologist Dr Cillian de Gascun, said there was “a tendency for people to think we’re back to normal” now that large parts of the economy were reopening.

However, he warned “we cannot go back to the way we acted in January” and that things needed to be done in a controlled and safe manner.

Dr de Gascun told Newstalk Breakfast people need to be responsible and to think about the impact of the virus on their parents or grandparents or friends with compromised immune systems.

Public health expert Dr Gabriel Scally said there was not time for information campaigns on the dangers of the spread of Covid-19 at this stage.

“We don’t have time to turn everyone into saints,” he told RTÉ’s Today with Sarah McInerney. “This is not a time for panic or the ringing of alarm bells.”

Dr Scally said the State and Northern Ireland were both “tantalisingly close” to getting control of the virus and that it would be terrible to let the hard work slip away due to risky behaviour or importing the virus. He said it was wrong to have flights coming into Ireland from Texas, which was a high risk zone.

“We’re at a fork in the road, there are two ways to go. We really need a safe summer, a zero Covid summer,” he said.

He called on the Taoiseach and Minister for Health to have “a real proper discussion” with Northern leaders about how “we can have a zero Covid island and that means taking hard decisions about quarantine of travellers”.

On Friday, it was announced that there had been no deaths from Covid-19 in Northern Ireland for the seventh day in a row, according to the North’s Department of Health figures.

The last death with coronavirus was reported by the department on Friday July 3rd.

Some 554 people have died in the North with the virus to date.

However, another four positive cases have been confirmed since Thursday, bringing the total to 5,772.

The department announced on Thursday that the current estimate of the R rate in Northern Ireland is between 0.5 and 1

Cinemas, bingo halls and gyms in Northern Ireland reopened on Friday as part of the latest relaxation of lockdown rules.

A quarantine period for those arriving in the region from more than 50 countries, including popular holiday destinations such as France and Spain, was also stopped.

The Northern Ireland Executive agreed on Thursday to scrap the requirement that those arriving from countries categorised as low to medium-risk self-isolate for 14 days.

The region is the first part of the UK to reopen gyms.

Marriages and baptisms in places of worship and civil partnerships in local government offices have also been given the green light to resume.

From Friday, face coverings on public transport in the North will be mandatory.

The Government announced masks were being made mandatory on public transport in the Republic from June 30th but regulations to provide for that are still being prepared.

Dr Mary Favier, president of the Irish College of General Practitioners, said it was not a time to panic but that GPs had started to see a rise in case numbers in recent weeks.

She warned that if cases continue to duplicate, the country could be back to April levels of infection within four weeks.

“We have choices to make, it would be such a pity to lose ground. If the R number rises to 1.5 by the end of August, we will be back to April levels,” she said.

Dr Favier said frontline workers are exhausted and were alarmed at the prospect of having “to do it all again” in the autumn if there was a second wave. Additional reporting: PA