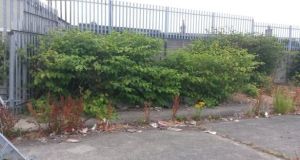 Homeowners in Wales were awarded compensation when their homes became unsaleabe because Network Rail failed to clear knotweed on their land.

Homeowners near the Phoenix Park should consider taking legal action to force Dublin City Council to deal with an “epidemic” which has seen one of the most invasive weeds in Europe spreading throughout residential areas, former Labour Party TD for Dublin Central Joe Costello has said.

The spread of Japanese Knotweed on local authority land in Stoneybatter has sparked concern among local homeowners who fear its presence may seriously damage and devalue their properties.

While the council has begun spraying the weeds on the O’Devaney Gardens site off the North Circular Road, it has warned homeowners they will have to pay private contractors to tackle any problems on their own land.

Dr Frances Giaquinto, a Co Clare based botanist and ecologist who has done extensive work to tackle the invasive species, said concerned homeowners should immediately get a site assessment and report drawn up by an expert before the problem worsens.

She estimated that it may cost €500-plus for a standard urban garden inspection and report to confirm the exact nature of the infestation and how best to tackle it. Dealing with the problem could take several years and cost more than €2,000.

Mr Costello said he had raised the issue with the local authority repeatedly over the last two years and he expressed pessimism that officials would work with local residents to address the problems.

“I think the council is taking an ostrich attitude to the problem and has its heads in the sand,” he said.

The company appealed the decision but earlier this month a court ruled the homeowners were entitled to damages after the plant had extended beneath both of their properties.

Mr Costello said the council-owned land had “not been managed in any form” for at least 12 years and he warned that unless it accepted responsibility and worked with people in the area to address the issues, they could too have legal recourse.

“What is needed is for the local authority to accept there is a problem and accept they have a responsibility to tackle it. They have known about this for at least two years and I have highlighted with them on multiple locations and it is very frustrating to get the same response over and over again, that the authority is not going to take any responsibility for anything but its own land,” he said.

A Dublin City Council spokeswoman has told The Irish Times that “appropriate professional staff are assessing the situation and developing solutions to treat the weed in an appropriate manner.” She said weeds growing in private or rented houses “would be a matter for the landlord or tenant”.

Green Party Councillor Ciaran Cuffe said he had written to the local authority calling for it to take a more “proactive approach” which would see it working with local homeowners to tackle the problem.

“This is not an easy problem to deal with but the key is to work together,” he said. “If the council just works on local authority land in isolation then the weed will simply return. We have to sit down with landowners in the area. What we need is a bit of joined-up thinking at a senior management level if we are going to take on this invasive species.”

Dr Giaquinto warned that proving the original source of the infestation could be particularly difficult if the problem is already widely dispersed, and advised enlisting professional advice early on to ensure “a fact driven, evidence-based approach”.