Ian Paisley suspended from House of Commons and DUP 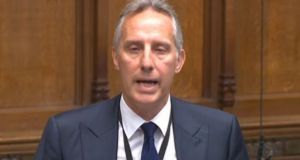 Ian Paisley will be excluded from the House of Commons for 30 sitting days from September 4th following a major breach of parliamentary rules.

Ian Paisley has become the first MP to face the prospect of a recall by-election after the House of Commons voted to suspend him for 30 days because he failed to declare two family holidays paid for by the Sri Lankan government.

Following the vote, the DUP said it had suspended Mr Paisley’s membership of the party, which was founder by his father, the late Rev Ian Paisley, “pending an investigation into his conduct”.

House of Commons Speaker John Bercow said the matter was “a regrettable state of affairs” and that he would inform the North’s chief electoral officer, who has 10 working days to set up a recall petition in Mr Paisley’s constituency of North Antrim. If 10 per cent of eligible voters in the constituency sign the petition, the seat will be declared vacant and a by-election will be held.

Mr Paisley, who was not in the chamber for the vote, said on Tuesday that he would contest a by-election if it was called. He apologised to parliament last week for failing to declare the holidays in 2013, which were worth at least £50,000.

The threshold for registering such hospitality at the time was around £660. He subsequently wrote a letter to the prime minister lobbying on behalf of the Sri Lankan government.

Strangford’s Jim Shannon was the only of the DUP’s 10 MPs present for the vote. The party is currently helping to prop up Theresa May’s minority Government.

In a statement, the DUP said: “The Officers of the Democratic Unionist Party have considered the report of the House of Commons Committee on Standards on Ian Paisley MP. The party takes this report and the matters contained within it very seriously. The party officers have decided to suspend Mr Ian Paisley MP from membership of the party pending further investigation into his conduct.”

Mr Paisley’s House of Commons suspension starts when parliament returns from its summer recess on September 4th. The sanction is accompanied by the loss of a month’s salary. Because of a recess in September and October for the party conference season, he would not return until November.

Mr Paisley told the Ballymena Guardian on Tuesday that he deeply regretted the actions which led to his suspension but promised to fight for the seat previously held by his father.

“There are also some who would have me booted out of Parliament and a by-election called to fill that vacancy. They are opportunists, some with questionable motives, and I can tell them that I have no intention of going quietly into the night. If a petition leads to a by-election make no mistake about it, I will seek re-election as I have never run away from an election in my life and don’t intend to do so now,” he said.

Sinn Féin deputy leader Michelle O’Neill said Mr Paisley’s colleagues in Westminster have overwhelmingly voted to impose the most serious sanction handed to any MP since 1949.

“When you consider some of the sleaze, corruption and criminal scandals that have engulfed the British Parliament during that time, that is quite extraordinary,” she said.

The Traditional Unionist Voice leader Jim Allister said the “biggest losers in this scandalous saga are the Brexit voting people of North Antrim who in upcoming crucial votes will now be left without a voice or a vote, because of the selfish antics of Mr Paisley”.

Patrick Corrigan, head of Amnesty International in Northern Ireland, said the victims were those killed in Sri Lanka.

“Mr Paisley saw fit to lobby the Prime Minister against a UN investigation into gross human rights violations, including the mass killing of civilians at the end of the Sri Lankan war, for which no adequate investigation has ever been carried out.”