French ambassador says his country does not view Ireland as neutral 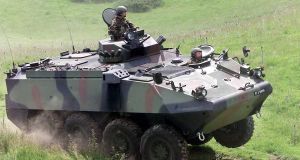 Fine Gael MEP Maireád McGuinness told the summer school that Irish spending on defence was the lowest in the EU at 0.3% of GDP

Ireland must engage in a national debate on its borders and security which does not descend into accusations of sending “our sons and daughters to war”, the vice-president of the European Parliament has said.

Speaking at the MacGill Summer School, Fine Gael MEP Maireád McGuinness said securing the external border of the EU “is now a priority” amid fears that failing to do so would see the return of internal EU borders and the breakdown of the Schengen system of free travel.

“We do not support the creation of an EU army, but we do need an outcome that meets our national objectives, reflecting our traditions, building on our strong record of peacekeeping and humanitarian support, and working with other EU member states in a new spirit of co-operation, mutual respect and openness.”

Ms McGuinness was speaking on the topic of “Securing Europe’s Future, A stronger More Cohesive Europe in a Turbulent World”.

Speaking from the floor of the summer school, French ambassador to Ireland Stéphane Crouzat said his country does not see Ireland as neutral.

He pointed to the roles of Ireland’s military in training the armed forces in Mali and in rescuing migrants in the Mediterranean, as well as its UN peacekeeping functions. “So the perception that Ireland is seen as outsiders and as being a very neutral country that does not want to engage with anything is just plain wrong.”

He said he had recently discussed the issue with Department of Defence officials, who said they prefer the term “non-aligned” to “neutral”.

Ms McGuinness said Irish spending on defence was the lowest in the EU at 0.3 per cent of GDP.

“There is no question of overriding our sovereign wishes. It’s time for a national debate on security and defence which does not descend into accusations of Ireland’s sons and daughters being conscripted into an EU army and heading to war...Citizens are concerned about security – with terrorism, organised crime and cybercrime top of the list – and Europe must respond to those fears.”

He said Irish diplomats and military personnel were highly trained and highly motivated, but there was no central planning body to handle the range of modern global threats faced by the country such as terrorism, a resurgent Russia and the rise of authoritarian regimes.

He said the Defence Forces, the Garda and the government have the capacity for strategic planning but there was no central body to bring them all together. “This, to my mind, is the critical missing link to strengthen Irish security, and to strengthen Ireland’s contribution to the security of European citizens.”