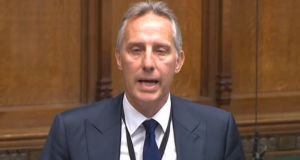 Ian Paisley apologising to the House of Commons in London. Photograph: PA

Ian Paisley has declared that he “will not go quietly into the night” and will recontest his North Antrim Westminster seat if he is forced to stand down.

As the House of Commons decides whether to suspend him for 30 sitting days for failing to declare two family holidays to Sri Lanka paid for by the Sri Lankan government Mr Paisley has insisted he intends to battle to hold his seat.

Mr Paisley through the pages of the Ballymena Guardian said he had never run away from an election and had no plans to do so now. He described as “opportunists” those pushing for a petition to force him to stand down.

Under a parliamentary “Recall Petition” a petition could be triggered whereby Mr Paisley could lose his seat if 10 per cent of the North Antrim eligible electorate - about 7,500 people - signed a petition to have him removed as MP.

The current edition of the Ballymena Guardian also reported Sinn Féin as stating that it was “inundated” locally with people seeking to sign such a petition to oust Mr Paisley as MP.

In the newspaper Mr Paisley again apologised for breaching parliamentary rules and said he was prepared to accept whatever punishment was meted out to him. But he also defended his record in working for his North Antrim constituents.

The House of Commons is on Tuesday expected to endorse a recommendation by the House of Commons standards committee that he be suspended for 30 sitting days after the Westminster Parliamentary Commissioner for Standards Kathryn Stone found that Mr Paisley had breached parliamentary rules by not registering the holidays and also for lobbying on behalf of the Sri Lankan government.

DUP party officers also are due to meet to consider whether he should face any additional sanctions.