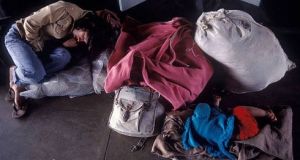 Dublin remains the centre of the State’s homelessness problem with 1,352 families accessing homeless services in the region out of a national total of 1,754. There were 2,858 children in such services in the capital in June

The number of homeless people in the State increased slightly in June to almost 9,900, Department of Housing figures show.

A total of 6,048 adults are now accessing local authority emergency accommodation, according to figures for the third week in June, an increase of 28 (0.26 per cent) on the previous month. A total of 3,824 children were homeless at the same time, a decline of two.

Dublin remains the centre of the State’s homelessness problem with 1,352 families accessing homeless services in the region out of a national total of 1,754. There were 2,858 children in such services in the capital in June.

Homeless persons and families are provided with various types of emergency accommodation services by local authorities, including hotels and B&Bs, hostels, and private rented accommodation.

He said that “for the corresponding period in 2017 we saw an increase of 242 adults and dependants, so the change is much better when compared to last year”.

However, homeless campaigners said the figures remained unacceptably high. Focus Ireland said there was “welcome progress” in some areas but the Government was “still failing to do enough to ease the crisis”.

“We must never allow the constantly rising number of people becoming homeless each month to become the norm, and there is a real risk that this is starting to happen,” the group said.

Child poverty charity Barnardos said the figures showed large increases in child homelessness in the southeast and mid-west. “More is clearly needed to support families in these regions,” said June Tinsley of Barnardos.

The Department of Housing has also released provisional figures for the numbers of people awaiting social housing across the country. The 2018 Summary of Social Housing Assessments shows that almost 72,000 people across the State have been assessed and approved for social housing support, a drop of almost 14,000 (16 per cent) on last year’s figures, the department said.

Mr Murphy’s described the numbers as “encouraging”, noting that “almost every one of the country’s local authorities reported a decrease in their annual waiting lists”.