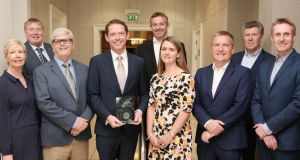 Stephen Teap (centre) has been named Cork Person of the Month for September.

Father of two, Stephen Teap who lost his wife, Irene to cervical cancer has been honoured for his activism on behalf of all those affected by the Cervical Check scandal by being named Cork Person of the Month for September.

Cork Person of the Year Award organiser, Manus O’Callaghan recalled how Mr Teap had become involved in the campaign following the death of his wife, Irene in July 2017 following two incorrect test results in 2010 and 2013.

“Those two incorrect test results which missed pre-cancerous cells and the early stages of the disease led to Irene’s delayed diagnosis in 2015 and she sadly lost her battle in July 2017,” said Mr O’Callaghan.

Ten months after Ms Teap’s death, the CervicalCheck debacle came to light after the Vicky Phelan court case, which exposed how the misreading of smear test results in a lab meant many Irish women had got incorrect diagnoses.

“In 2018, Stephen, alongside fellow campaigners Vicky Phelan and Loraine Walsh, launched the 221Plus Patient Support Group to help victims directly affected by the CervicalCheck screening failure, as well as their families.

Cork Person of the Month sponsor Ann-Marie O’Sullivan also paid tribute to Mr Teap who was nominated for the award by Cork South Central, Michael McGrath from Carrigaline where Mr Teap lives with his son, Oscar and Noah.

“The awareness that Stephen has raised, and continues to raise, surrounding cervical cancer and CervicalCheck has been invaluable. His work has given a voice to the women and their families affected by these issues,” she said.

Mr Teap said he was honoured to be chosen as Cork Person of the Month for September as he recalled how just last month he and Lorraine Walsh met with An Taoiseach Leo Varadkar and Minister for Health, Simon Harris.

“We met with them to discuss the basis for a formal apology on behalf of the State to the women and families affected by the CervicalCheck scandal – one of the reasons for an apology is that it starts the healing process,” he said.

“I felt this scandal affected everybody in Ireland, and it was not just a problem for women, but for everyone whose lives were impacted and behind every case you hear of, there are families just like mine.

“On behalf of those families, I want to make sure that the problems surrounding the CervicalCheck Screening Programme and general women’s health are improved upon for Irish women in the future.”

“I hope this award will help promote our work to get accountability and justice for all those involved. The system failed my wife, Irene and mother of our two young sons and I just want to make sure it never happens again to any other family.”