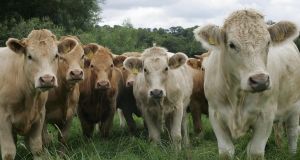 Agreement had been reached between meat industry representatives and farm organisations on a two strand agreement for the reform of the Irish beef sector, the Minister for Agriculture has said. File photograph: Brenda Fitzsimons/The Irish Times.

An agreement to end the beef dispute has been reached following marathon talks at the Department of Agriculture.

Minister for Agriculture Michael Creed claimed all the parties to the dispute have approved the agreement which will see increased prices for beef farmers and reform of the sector.

The deal will only come into effect when pickets and blockades by farmers at meat factories are lifted. Farm organisations will now work to persuade the farmers to give up their protest.

However, one of the organisations which was party to the talks has said it is neither accepting nor rejecting the proposals.

The Independent Farmers of Ireland, recently set up to represent farmers on the picket line, stated the decision will ultimately be made “by all the peaceful protesters at the factory gates”.

The unsigned statement said meetings will take place to achieve a consensus and concluded that the leadership of the organisation “have the approval to negotiate but not the power to make the final decision as this is a democratic movement”.

Sources close to the talks say they were surprised by the intervention of the Independent Farmers of Ireland as they believed that they had all agreed to approve the deal as outlined.

Other farm groups have committed to end the pickets outside meat factories, which have shut down 80 per cent of production in recent weeks and led to 3,000 people working in processing plants being temporarily laid off.

Beef processors, in turn, have agreed to end all legal proceedings against those involved in the blockades.

“I wish to thank all participants in this process for their contribution towards agreeing a way forward for the Irish beef sector,” Mr Creed said.

“I hope that this agreement will prove to be a first step in fostering stronger partnerships in this critical sector for the Irish economy and for rural Ireland.”

The IFA president Joe Healy cautioned that the agreement was “far from a perfect deal” and that some aspects of it “will require a lot of further work”.

He added: “During a difficult endgame to the talks, the farm organisations stood together to get the best available outcome for farmers.”

producers will immediate benefit from increased prices for cattle at the factory gate and a beef market taskforce will be established to develop a pathway for the future of the sector.

A beef market taskforce will be established to ensure that commitments entered into as part of the agreement will be implemented.

The agreement commits to an independent review of the Irish beef sector by the end of the year and also to greater transparency in price at all ends of chain from farmer to retailer.

The meat industry has confirmed that a base price at individual plant level will apply to all steers and heifers regardless of age or breed.

Meat Industry Ireland welcomed the conclusion of the beef talks, but warned that the seven week dispute has been an “extremely damaging episode for all stakeholders in the beef and sheep sectors”.