Academics to examine use of ‘design and build’ construction model abroad 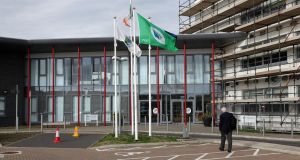 An independent review is to get under way into the model of construction favoured by the Department of Education for new schools following controversy over the structural safety of dozens of new buildings.

Minister for Education Joe McHugh said the review would examine the experiences of other countries that are using the department’s design-and-build model of school construction.

Design and build is a fast-tracked construction model that involves the prefabrication of some materials off-site.

The review arises from a commitment given by Mr McHugh after structural assessments last year raised concerns over the safety of dozens of schools constructed by Western Building Systems (WBS).

Mr McHugh said the international review would be the precursor to a wider independent review of the department’s design-and-build programme in the State.

He said this international review had been designed to ensure it did not prejudice legal action initiated by the department against WBS and other construction firms.

Remediation works have been required in 39 schools build by WBS in order to make them safe, according to department figures.

And 22 schools built by WBS were identified as requiring urgent repairs to make them safe last year.

The review, to be undertaken by academics at Technological University Dublin, is due to be completed at the end of this year and will involve a desktop review of relevant available reports and other sources of information.

The academic team, to be led by Prof Lloyd Scott and supported by Dr Alan Hore of TUD, follows a procurement process that took place during the summer.

In a statement WBS said the Minister’s decision was an acknowledgment “for the first time that there is a systemic flaw in the school-building programme”.

“However, he has failed to undertake the review he promised and the reasons given for not doing so are questionable,” the statement said.

“This restrictive review does not examine the department’s own practices and procedures. Instead, the Minister has chosen to proceed with a desktop exercise, which should be standard practice for something as important as the school-building programme.”

The company asked why the Minister “continues to resist a full, independent review” and said if there was legal advice to show “it can’t be undertaken at this time, it should be published”.

“If not, it leaves a question mark over the existing verification process at a time when schools continue to be built.”

Mr McHugh said his approach followed advice from the office of the Attorney General.