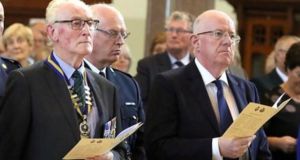 Minister for Justice Charlie Flanagan at a service for policemen killed by the IRA during the War of Independence. Photograph: Ronan McGreevy

Minister for Justice Charlie Flanagan has become the first government minister to attend a commemoration service for policemen killed by the IRA in the War of Independence.

Mr Flanagan was a guest at the annual interdenominational service for members of the Royal Irish Constabulary (RIC) and the Dublin Metropolitan Police (DMP) held at the Church of St Paul of the Cross in Mount Argus in Dublin on Saturday.

The names of 11 RIC and four DMP men killed in 1919 during the first year of the War of Independence were read out.

Mr Flanagan said he attended because the policemen involved were “doing their job. They were murdered in the line of duty.

“They were doing what police officers do. As they saw it they were protecting communities from harm. They were maintaining the rule of law. These are fundamental to police services everywhere.”

Mr Flanagan described himself as a “pluralist who believes in the co-existence of peoples of different traditions on the island coming together.

“As Minister for Justice, I acknowledge that being a policeman is a very tough job. The men that we commemorated were all killed in the line of duty.

“I was really struck speaking to families afterwards over a cup of tea as to the real sensitivities here. There was a number of RUC widows from the North who don’t venture often to Dublin. The day brought back poignant memories for them. They were pleased to see a representative of the Irish Government there.”

Mr Flanagan said the families of RIC and DMP men killed in the War of Independence have had to live with a century of their relatives being described as “traitors and disloyal citizens”.

He maintained his presence on Saturday was in the same spirit as his attendance at a service in Grangegorman in 2016 to remember the British soldiers killed in the Easter Rising.

“The fundamental basis of the Good Friday Agreement brings people together. I see the fundamental principle of Brexit being the opposite.

“These are difficult and sensitive issues. We cannot any longer ignore them or be partisan. I believe I have a duty as Minister for Justice to police officers.”

The event was organised by the Historical and Reconciliation Police (Harp) Society set up a group of ex-gardaí to remember the 640 RIC and DMP men killed between 1836 and 1922 of whom 492 were killed during the War of Independence, mostly by the IRA.

Harp Society founder Jim Herlihy said the minister’s presence was “hugely significant” to the families of policemen killed in the War of Independence.

“The Government now realises there is a need to commemorate the one grouping not commemorated officially by the Irish State – the policemen killed in the line of duty”.

Mr Herlihy stressed he “totally accepts the argument” that some have made that the RIC were involved with Crown Forces, the Black and Tans and the Auxiliaries, in opposing the IRA which was fighting for an independent Irish state.