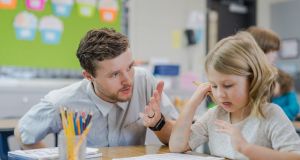 Resource teachers and special needs assistants should be used only for supporting vulnerable pupils with additional needs. Photograph: iStock

The Department of Education is investigating more than 50 cases in which schools are alleged to be “misusing” special needs teachers by using them to teach mainstream classes.

Under official rules, resource teachers and special needs assistants should be used only for supporting vulnerable pupils with additional needs.

Parents and special needs campaigners, however, say they are aware of many cases where resource teachers assigned to help their children have ended up being used to plug gaps in the classroom.

This, they say, is depriving vulnerable children of vital supports in the classroom.

Adam Harris, chief executive of the autism support group AsIAm, said: “It’s concerning to see so many cases where it appears additional teaching time is being misused. These are only the cases documented by the department. We’re aware of many more allegations.”

He said the issue was all the more concerning given the number of special needs children on reduced hours timetables or being suspended, often on the basis that schools lacked expertise to support these children.

Some school teachers and principals, however, say that a combination of teacher shortages and underfunding means they are sometimes left with little other option.

The department confirmed to The Irish Times that it has received 88 reports of “potentially inappropriate use of special education teaching resource” across both primary and secondary schools since September 2017. The majority of these reports arose from school inspections.

It said it had written to all the schools – 71 primary, 17 secondary – to request they review their provision and confirm the school is utilising its allocation in accordance with guidelines, and provide copies of timetables.

Of the 88 schools, it said 34 schools had confirmed they were now utilising their allocation in accordance with the guidelines.

Of the 50-plus remaining cases, a further 29 schools had replied and their responses were being reviewed, while replies are awaited from 20 schools.

The department said it was “continuing to engage” with five schools which had not yet been in a position to demonstrate compliance.

“Further follow-up action may then take place with schools, including an inspection visit, if necessary,” the department said in a statement.

Some of the initial inspection reports indicate that some schools have been using resource teachers for mainstream class teaching, or reducing the pupil-teacher ratio in mainstream classes.

There have also been reports of using special needs staff to provide additional subjects for pupils who do not have special educational needs.

A new model for allocating special education teachers to schools was introduced in September 2017.

The department said, in advance of this, that a circular was sent to schools stating that schools should ensure that additional special needs teaching supports should be used “in their entirety” to support pupils identified with special educational needs, learning support needs, and additional literacy needs such as English as an additional language.

It said the criteria under which special needs assistants (SNAs) were allocated to schools to provide for the additional care needs of children was also set down in a circular sent to all schools.

This notes that SNAs are recruited specifically to assist in the care needs of pupils with disabilities in an educational context.

“SNAs, therefore, do not have a teaching-pedagogical role and it would not be appropriate for pupils with special needs to be taught by an SNA,” it said in a statement.

The department added that the Education Act (1998) outlined the primacy of the teacher in the education and personal development of students in schools.

“When a pupil with significant and complex care needs has access to support from an SNA, the classroom teacher and the special education teacher will work closely with the SNA.

“However, the class teacher continues to have primary responsibility for teaching and learning, and for the social and emotional development and progress of the pupil,” the department said.

He also said that plans to develop an alternative model of support to replace the current SNA scheme should be paused until there is confidence that the current system is being appropriately managed.