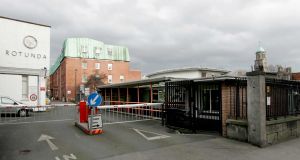 The Rotunda Hospital in Dublin, where what it is believed to be the State’s first baby of the year was born. Photograph: David Sleator

A girl believed to be the State’s first baby of the year, and the decade, was born at 12 minutes past midnight in Dublin’s Rotunda Hospital.

Ms Setuke told RTÉ she was tired but delighted with her new arrival and thankful to the staff in the Rotunda who helped with the birth.

She said she did not expect Victoria to be the first baby born in Ireland in this decade and hoped she would look back at the fact fondly in the future.

Cork-based couple Diana Rodrigues and Cyril Pinto welcomed Aida Cheryl at Cork University Maternity Hospital 10 minutes after The Rotunda birth. She is their second child, following her brother, Aidan who was born in 2012 to the couple, who are originally from India.

Polish couple Danuta and Tomasz Ptoczak, from Rathmore in Co Kerry, were celebrating hours later at the Cork hospital after Danuta gave birth to baby Susanna, who was 3.9kg.

The first baby of the year to be born at University Maternity Hospital Limerick (UMHL) arrived 46 minutes into the new year. However, as the mother requested no publicity, no further information was made available other than mother and baby were doing well.

It was a pattern repeated across the State as hospitals acceded to the requests of parents for privacy. Hospitals said that in the absence of consent of the woman involved they were prevented from providing information.

The Coombe Women’s Hospital said two babies were born in the first five hours of the day but the families involved did not want any publicity and no further details would be provided.

Holles Street said it had at least one baby born in the early hours of January 1st, but was unable to provide any details , including the time of the first arrival.

Our Lady Of Lourdes Hospital Drogheda said a baby girl was delivered at 6am but no further details were forthcoming. Cavan General Hospital said it could not confirm if any babies were born as information could not be given out over the phone.

UMHL’s assistant director of midwifery Mary Tevlin said: “It’s been a fantastic day so far and we’ll have plenty more as the day goes on.”

Donegal woman Ashley Barron said she was “on cloud nine” after having a baby girl at the Limerick hospital at 4.33am.

The infant, who was yet to be named, arrived four days early and Ms Barron hopes she will be “the first of many”.

“She hasn’t said a peak since she was born, long may it continue, please god,” joked Ms Barron, who runs the Junction Gastro Bar and Guesthouse in Limerick Junction along with her partner MJ Buckley. “I’m feeling great, absolutely on cloud nine, but it’s still very surreal at the minute, it has to sink in yet.”